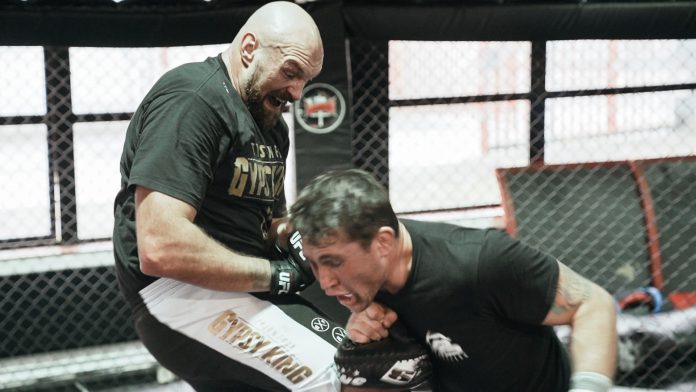 TYSON FURY will swap the ring for a mixed martial arts cage after he retires from boxing.

The Gypsy King has repeatedly teased a transition into MMA for the last two years, training with UFC star Darren Till at Liverpool’s famed Kaobon gym.

Fury, 33, has gone quiet on the MMA front as of late, but dad John is adamant he will set foot inside the cage before his story is all said and done.

He told Joe: “I think the rougher it gets for Tyson, the better he likes it.

“It brings what they call, I dunno, something different to his job, doesn’t it?

“It gives him more goals to achieve and more things to look at an address.

“I think that’s what Tyson wants, and when he does finally retire from boxing, he’ll probably go to that and probably come back to boxing.

“Whatever he does. But he will engage on that, you’ll see.”

Fury showed some surprisingly good knees and elbows during his training session with UFC middleweight Till.

And John believes a ‘top’ MMA coach could make the WBC heavyweight champion a force to be reckoned with inside the cage.

He added: “With the right training, [he’d do] very well. Because I’ve seen him excel in different sports like wrestling.

“I’ve got some kind of an idea of what Tyson was from that, and he likes to get involved, Tyson.

“And I know what he’s like from being a kid. He can use more than his hands, believe it or not.

“And he’s quick and he’s light on his feet, but his balance is good and I do believe if a top MMA trainer took him on, he could do big things with him.

“Ask Darren Till, he’s done the work with him. He’s got a good forearm smash and all that kind of thing.

“The knees come up and the head goes in, the elbows. I’ve seen him do it out of boxing, see.

“I’ve seen him outside in fights and this, that and the other. I know what he’s capable of.

“And with the right training, yes, he could do that.”

The Wythenshawe warrior will renew his rivalry with The Bronze Bomber on October 9 at the T-Mobile Arena in Las Vegas.

Fury – who recently celebrated the birth of his sixth child – stopped the American in the seventh round of their Sin City rematch last February to claim the WBC strap.