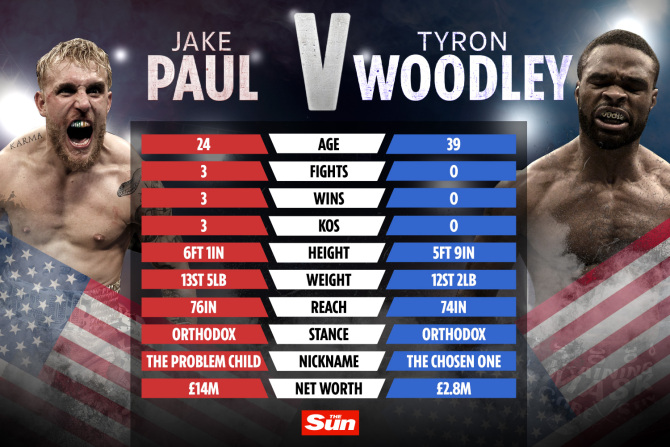 ‘ALL hell broke loose’ as one of Jake Paul’s team got into an argument with Tyron Woodley’s mum on Thursday afternoon.

The UFC star faced-off against the YouTuber ahead of their scrap and a fracas erupted as members of the fighters’ teams went head-to-head.

Footage posted online shows a member of Paul’s entourage being approached by Woodley’s mother who starts shouting at him.

He looks unfazed before the camera turns to an angry looking Woodley who is trying to reach the rowing pair.

A separate scuffle takes place nearby as a man falls to the ground.

Several attendees then try to keep the peace with calls of ‘chill’ and ‘relax’ before security officials move in as it appears most people in the room are involved.

And then worryingly someone shouts: “Why have you got a knife man?”

The former UFC champion, 39, comes into the bout off the back of four consecutive losses in MMA, having never taken part in a professional boxing contest.

During Wednesday’s session, he raised one fist to the crowd before a workout on the pads.

Whoever loses Sunday’s fight will have an ‘I love’ tattoo featuring the victor’s name inked on their body.

And the veteran has insisted that he is not fighting Paul to take some punches, hit the canvas, and cash his cheque.

Paul will fight Woodley at 11pm local time, meaning a 4am start early on Monday morning for UK fans.

On the undercard are two young British fighters looking to make a mark on their US debuts.

Tommy Fury faces Anthony Taylor in a bid to earn his own fight against Paul.

And Daniel Dubois is up against Joe Cusumano as he continues his bounceback from last year’s defeat to Joe Joyce.

The 23-year-old, like Fury, took part in the open workout and has discussed potential showdowns with Derek Chisora or Dillian Whyte if he wins on Sunday.