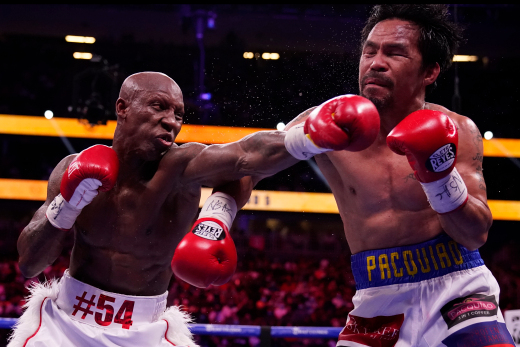 MANNY PACQUIAO made an unsuccessful return to the ring tonight to face Yordenis Ugas for the WBA welterweight title, losing on points.

Pac Man, 42, was set to face pound-for-pound king Errol Spence Jr but the American was forced to pull out after having eye surgery.

Manny Pacquiao appears keen to run for president of the Philippines after his fight with Yordenis Ugas.

At least that’s what Pacquiao’s political spokesman Monico Puentevella said about the boxing legend, who is also a senator.

“After the Las Vegas fight will be the biggest fight of his life in May of next year.

“He’s all set to run. He’s been eyeing that for some time, and he just wants to finish this boxing match. He told me to tell everybody categorically that he’s going to run”

Spence Jr was supposed to face Pacquiao in Sin City but had to pull out due to an eye injury.

The American boxer heard Ugas calling him out for a fight and he had a a very brief response.

However, Spence Jr had to withdraw from the super-fight due to an eye injury – and will now need to undergo surgery.

The American boxer was due to defend his WBC and IBF welterweight titles against Pacquiao.

But he revealed the devastating news of his injury and was replaced by Yordenis Ugas, who beat Pacquiao on Saturday

PENC FOR HIS THOUGHTS

Yordenis Ugas confirmed that Errol Spence Jr is the next fighter he wishes to face.

Ugas picked up a famous victory by beating Manny Pacquiao by unanimous decision in Las Vegas.

He said after the fight: “He is next one on the list that I want to fight.

“But most of all, I’m praying that he recuperates”

The WBA welterweight champion made his desire to unify the division known seconds after having his hand raised.

Ugas said: “Now the plan is to unify the title at welterweight.

“Everybody said that he was the champion, now we know who the real champion is”

Pacquiao was beaten on his return to the ring by Ugas following a two-year absence.

Ugas confirmed that he is willing to give Pacquiao a rematch if he ever requests it.

He said: “He can have a rematch. 200 per cent, Manny’s a great legend, a great fighter.

“He wants a rematch, no question about it a legend like that deserves it”

Yordenis Ugas revealed he was ‘perfectly fine’ against Manny Pacquiao after fans worried he fought with an injured left arm.

“That’s boxing and he was perfectly fine and if his left hand was so bad why did he neutralise him with his left hand?

“That’s what won the fight, the left hand”

Yordenis Ugas picked up a famous victory over Manny Pacquiao in Las Vegas.

Ugas thanked Pacquiao for the honour of sharing the ring together in Sin City.

He said: “I’m very excited, but most of all I want to thank Manny Pacquiao for giving me this moment in this ring today.

Manny Pacquiao hinted at retirement after losing to Yordenis Ugas in Las Vegas.

Pacquiao said: “In the future, you may not see Manny Pacquiao fight again in the ring.

“I don’t know. But for how many decades, I’m so happy with what I’ve done in boxing.

“I contribute a record in boxing also and to make boxing the top. And especially bring honour to my country and the Filipino people.

Manny Pacquiao was beaten on his boxing return by late substitute Yordenis Ugas.

Pacquiao’s shock defeat has left his boxing future in doubt as he hinted at retirement.

The legendary boxer was due to challenge unbeaten American Errol Spence Jr for the unified WBC and IBF titles.

But after Spence Jr pulled out with an eye injury, Ugas stepped in and took the opportunity of a lifetime with both hands as he scored a famous victory.

The Filipino legend lost by unanimous decision in Las Vegas

PacMan was beaten on his return to the ring by Ugas following over two years out.

And according to ESPN he needed eight stitches in total – five to close one cut and three stitches glued onto the other.

Pacquiao was offered a rematch by Ugas, who retained the WBA belt formerly held by the Filipino icon.

But PacMan hinted at retirement following his 72nd fight, which would bring an end to one of boxing’s most celebrated careers.

Pacquiao was beaten in his first fight for over two years as he returned to the ring – but it was not for a lack of trying.

According to CompuBox, the Filipino boxing icon threw 815 punches, compared to Ugas’ 405.

It meant he was twice as active, but was 21 per cent less accurate.

Ugas landed with 37 per cent of his punches, totalling 151 over 12 rounds, while Pacquiao finished with only 130, equalling 16 per cent.

Most importantly for the champion was his jab, which helped establish dominance in the battle between southpaw and orthodox.

For Pacquiao, he found home with 42 of the 475 thrown, meaning he connected with just nine per cent of his lead southpaw jabs.

Manny Pacquiao admits he ‘may not’ return to the ring following his loss to Yordenis Ugas, writes CHISANGA MALATA.

The Filipino legend, 42, suffered a unanimous decision defeat to the WBA welterweight champion in front of a packed crowd at Las Vegas’ T-Mobile Arena.

Father Time looked to have finally caught up with the 42-year-old, who is now thinking about life after boxing.

In his post-fight press conference, he said: “In the future, you may not see Manny Pacquiao fight again in the ring.

“I don’t know. But for how many decades, I’m so happy with what I’ve done in boxing.

“I contribute a record in boxing also and to make boxing the top.

“And especially bring honour to my country and the Filipino people.

“I’m so proud to be a Filipino and thankful to all the fans all over the world.”

Two-weight world champion Danny Garcia has taken to social media to praise the efforts of both Pacquiao and Ugas.

“Props to Manny for taking on a tough challenge still a legend.”

What a career indeed!

If this is the end, then Pacquiao can have no regrets from his career.

Simply one of the greatest boxers to ever step foot in the ring.