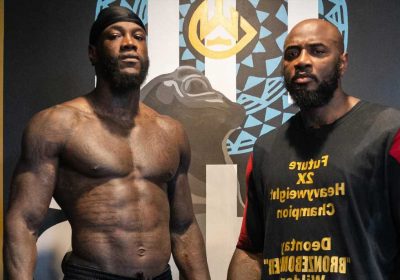 DEONTAY WILDER has ‘never been this hungry before’ as he prepares for his trilogy bout with Tyson Fury, his trainer Malik Scott said.

Fury was due to defend the WBC heavyweight title against Wilder on July 24, until he tested positive for coronavirus.

It pushed the fight back until October 9, giving the American, 35, even longer to train with new head coach Scott, the man he knocked out in 2014.

Wilder has revenge on his mind having been beaten by the Gypsy King in February 2020, with his hatred only growing towards his rival.

Asked on Instagram why he is so confident Wilder beats Fury, Scott, 40, replied: “Well for one because I’m training him now.

“And I’ve never seen him want to dismantle another man so bad.”

Fury, 32, drew with Wilder in 2018 but won the rematch two years later, which included a contracted trilogy.

But as the coronavirus pandemic postponed the fight, the Gypsy King tried to walk away from the obligation, believing the stipulation expired.

He then agreed to fight Anthony Joshua, 31, in Saudi Arabia in August, all while Wilder took his right to an immediate rematch to arbitration.

And after he won at the 11th hour, Fury’s historic undisputed title decider was scrapped as he was ordered to instead fight his heavyweight foe.

Source- Deontay Wilder ‘never been this hungry before’ says trainer Malik Scott ahead of trilogy fight with Tyson Fury (thesun.co.uk)