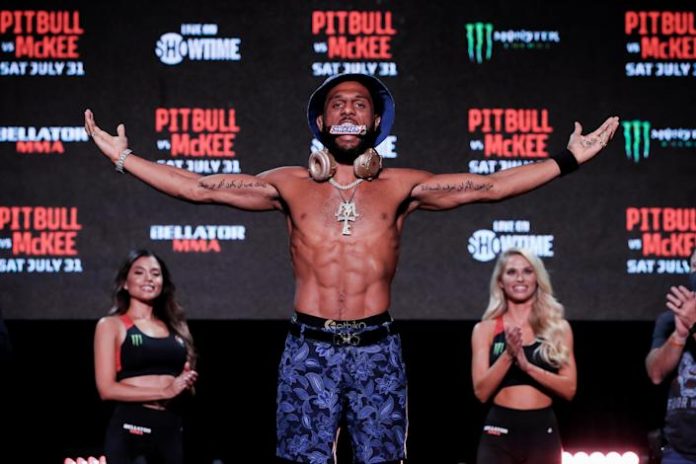 INGLEWOOD, Calif. – For six years A.J. McKee said time and time again he would one day be Bellator champion.

Saturday in front of his hometown crowd, with a $1 million win bonus on the line, McKee accomplished that dream when he submitted Patricio Freire via standing guillotine choke at 1:57 of Round 1.

Bellator 263 took place Saturday at The Forum. The main card aired on Showtime after prelims on MMA Junkie.

The two fighters entered the arena to opposite receptions. The challenger, McKee walked out first to raining applause and fans singing his walkout song. The champion, Freire, was met with harsh boos.

When the fight began, both fighters came out slow and methodical. The early staring contest was broken when McKee landed a high kick that stunned “Pitbull” and sent him against the cage. A violent punching combination dropped Freire and McKee celebrated.

The celebration was a bit premature for referee Mike Beltran who did not step in. “Pitbull” tried to spring to his feet but McKee grabbed hold of the Brazilian’s neck and cranked a standing guillotine choke. From there, the submission was locked and the technical submission came.

The tournament began in September 2019 with 16 fighters. Freire defeated Juan Archuleta by decision, Pedro Carvalho by knockout, and Emmanuel Sanchez by submission to advance. McKee, meanwhile, finished Georgi Karakhanyan by knockout, Derek Campos by submission, and Darrion Caldwell by submission.

With the victory, McKee keeps his career unbeaten streak alive – and extends it to 18. All of his professional fights have come under the Bellator banner with 13 finishes in that stretch.

As for Freire, the long-reigning Bellator featherweight champion loses at 145-pounds for the first time since he dropped a unanimous decision to Daniel Straus at Bellator 145 in 2015. The defeat snaps a seven-fight winning streak for “Pitbull,” which included an out-of-tournament against Michael Chandler.

The Bellator 263 results include: