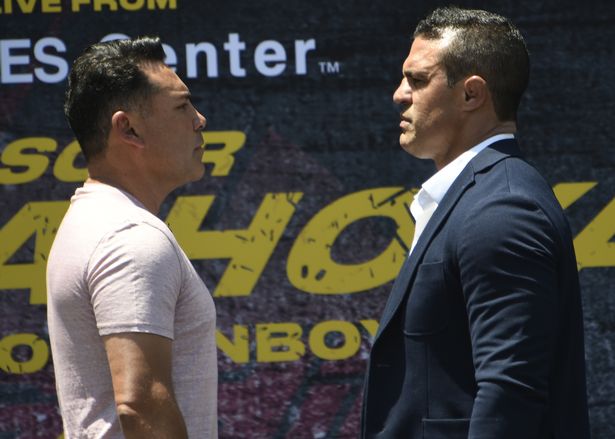 Triller Fight Club announced it will be a professional boxing bout, not an exhibition, in the light heavyweight division in a scheduled eight-round bout. “I’m very excited to announce my comeback against Vitor Belfort at Staples Center on Saturday, September 11th in a mega-event celebrating Mexican Independence Day,” said De La Hoya.

“Triller Fight Club and My team have been working together to bring the most epic event boxing has seen in a long time. I decided if I was coming back it was for real, none of this exhibition stuff. Two warriors, one walks out the other doesn’t. Vitor Belfort is clearly a very tough MMA legend and while I’m sure he will give me a good run, a knockout is in my plan.”

“This isn’t that WWE theatrics we’ve been seeing in boxing lately, this is the real deal, a real fight with real knockouts for a real win. This is not to be missed as I’m in better shape than I was 15 years ago.”

“Oscar De La Hoya is a true superstar in the boxing world and one of the greatest and most popular fighters of our time,” said Belfort.

“While we both have a great deal of respect for each other’s accomplishments, on September 11, I will make my MMA fans proud to show that MMA and ex-UFC fighters can take down even the best boxer in the world. I hope I don’t end up killing him but everything is on the table. This is a no holds barred, all out gladiator fight to the bitter end”.

“It’s truly an honor to be able to announce this highly anticipated event featuring the return to the boxing ring of Oscar De La Hoya against MMA legend Vitor Belfort on Saturday, September 11th,” said Triller Fight Club’s Ryan Kavanaugh. “The Staples Center, one of the premier sports and entertainment venues in the world, is the perfect location for this fight and we’re excited to return there for another monumental night of boxing.” Returning to lead the broadcast commentary will be entertainment icon Snoop Dogg who will be joined by HBO legend Jim Lampley.

De La Hoya vs. Belfort is the second event Triller Fight Club has promoted at Staples Center, the first being Mike Tyson vs. Roy Jones Jr. on November 28, 2020. The fight was boxing’s biggest pay-per-view event of the year garnering over 1.6 million buys.  Boxing’s biggest international star for over 15 years, De La Hoya was an 11-time world champion in six different weight classes while captivating fans all over the world and setting the standard by generating over $700 million dollars in pay-per-view income.

De La Hoya’s first world championship fight with then rival Shane Mosley was the inaugural event held at Staples Center on June 17, 2000. Among the sold-out crowd of 20,744 in attendance were a wealth of celebrities from the sports and entertainment world.  Known throughout his career for fighting the best competition and ‘taking on all comers’, included among the victories during De La Hoya’s Hall of Fame career are world champions; Julio Cesar Chavez, Pernell Whitaker, Ike Quartey, Fernando Vargas, Hector Camacho, Arturo Gatti, Yori Boy Campas, Ricardo Mayorga, Wilfredo Rivera and Felix Sturm.

A national hero in his native Brazil, Belfort was taught at a very young age by jiu-jitsu master Carlson Gracie who nicknamed him ‘Vitor Belfort Gracie.’ With fast, powerful hands and a slick ground game, Belfort was selected to compete at one of the first Ultimate Fighting Championship tournaments at the young age of 18.

A Brazilian Jiu-Jitsu black belt under the tutelage of Gracie, Belfort would continue on to have a highly acclaimed and distinguished career in UFC , becoming one of their most popular international fighters. He is a former UFC Light Heavyweight World Champion and also the winner of the UFC-12 Heavyweight Tournament Championship.  A must-see attraction throughout his career for MMA fans, Belfort became known for his explosive striking power with two of his fights heading the list of all-time best-selling UFC Pay-Per-View events. Belfort’s illustrious UFC career includes numerous records and accolades including ‘Knockout of the Night’ (five times), ‘Most Knockouts in UFC History’ (12), ‘Most First Round Finishes in UFC History’ (13), and ‘Youngest UFC Tournament Winner’ (19 years, 313 days).