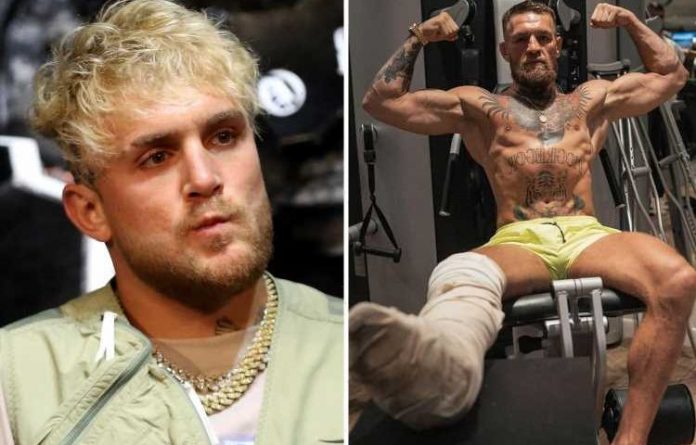 Jake Paul claims he’s in talks to fight Conor McGregor and brags “if we do fight, I’m going to knock him out”

JAKE PAUL has claimed he is in talks to fight UFC superstar Conor McGregor – and has vowed to ‘knock him out’.

The YouTube star has won all three of his professional boxing bouts so far and is set to take on former UFC champion Tyron Woodley on August 29.

And while Paul is focused on his fourth pro fight in one month’s time, he has also been talking up the possibility of a McGregor clash.

The American has been trash talking the 33-year-old Irishman for a long time in an attempt to goad him into the ring.

And he has now said that discussions are beginning to take place about the pair getting it on.

Speaking to The Herd with Colin Cowherd, he said: “I think it will happen. Look, I mean, I’m the money fight for Conor McGregor right now.

“There is no other fighter right now who is on a bigger level than me that is calling out Conor McGregor and wants to fight Conor.

“Our team is in touch with his team and there’s talks of it actually happening. And people at first thought I was just joking when I said I wanted to fight him.

“But now it’s as real as it gets, it’s more real than ever and by the way, if we do fight, I’m going to knock him out.”

McGregor suffered an agonising defeat to Dustin Poirier in their trilogy fight earlier this month.

The former two-weight world champion broke his leg at the end of the first round, with a doctor’s stoppage handing Poirier the win.

It is the second time McGregor has lost to Poirier in just six months following his second round KO loss back in January.

Since returning to the octagon after facing legendary boxer Floyd Mayweather in 2017, McGregor has lost three of his four MMA fights.

He was forced to submit against Khabib Nurmagomedov back in 2018, before returning 15 months later to knockout Donald Cerrone in just 40 seconds.

However, another year out the ring has been followed up by two defeats to Poirier.

While talk of a McGregor-Paul clash rumbles on, UFC president Dana White has insisted the Irishman will get another crack at Poirier due to the circumstances of the stoppage.

Speaking after the trilogy, the UFC boss said: “It sucks, it’s brutal. It’s not the way you want to see fights end. Dustin Poirier will fight for the title.

“And when Conor is healed and ready to go, you do the rematch I guess. I don’t know.”

Source- Jake Paul claims he’s in talks to fight Conor McGregor and brags “if we do fight, I’m going to knock him out” (thesun.co.uk)