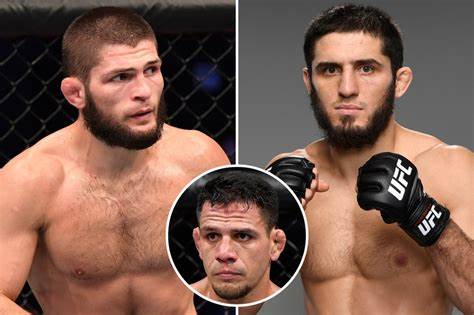 The Russian formerly announced his retirement from the sport in March, having defeated Justin Gaethje in October 2020.

Khabib, 32, announced that fight would be his last following the death of his father in July 2020.

But it seems the former UFC lightweight world champion could make a sensational return to the Octogan.

Brazilian dos Anjos, 36, has claimed he will fight Khabib if he defeats Islam Makhachev, 29.

Dos Anjos tweeted that the UFC has confirmed his five-round bout with Makhachev, due to take place in Abu Dhabi on October 30.

He wrote: “I just heard back from the UFC that Islam (Makhachev) accepted to fight me Oct 30 5 rounds in Abu Dhabi and Khabib agreed to come out of retirement to avenge his brother’s loss after that.”

Makhachev is a close friend and protege of Khabib’s and is seeking to emulate his compatriot and training partner.

And he has been tipped to follow in Khabib’s footsteps by fighting and defeating Connor McGregor.

Currently, he is ranked fifth in the lightweight rankings, two places above dos Anjos.

The pair have been waiting to face one another for some time, with two previous scheduled meetings cancelled due to Covid-19 and illness to Makhachev.

However, neither the UFC nor Khabib has acknowledged the agreement dos Anjos has announced, so for now the former champion is still out of action.

UFC chief Dana White has expressed his desire to see Khabib back in the UFC, but he may take some persuading.