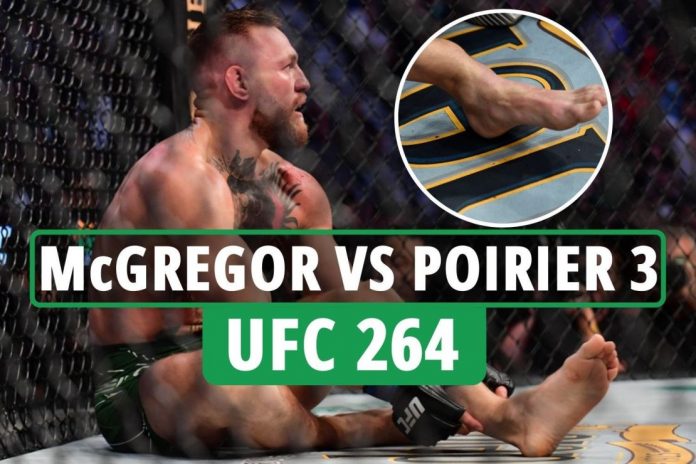 CONOR McGREGOR has been beaten by Dustin Poirier after an horrific leg break in the first round at UFC 264.

The fight was the third in the trilogy and now UFC boss Dana White has confirmed they will fight again for a FOURTH time.

McGregor has undergone a 3.5 hour surgery on the

McGregor says the surgery which he underwent on Sunday went ‘excellent’ and he’s now set for six weeks with a crutch.

He tweeted: “Just out of the surgery room guys! Surgery went excellent! Feeling tremendous! 6 weeks on crutch and we build back! Let’s go! God bless.”

He said: “I want to thank all the fans around the world for your messages of support. I hope you enjoyed the show.

“I want to thank all the fans in attendance at the arena, the place was absolutely electric.

“It was a hell of a first round, it would’ve been nice to get into the second round then see what’s what.

“But that’s the nature of the business, a clean break on the tibia and it wasn’t meant to be.”

McGregor added: “Dustin, you can celebrate that illegitimate win all you want but you’ve done nothing in there.

“That second round would’ve shown all. Onwards and upwards we go. We dust ourselves off, we build ourselves back, and we come back better than ever.”

Conor McGregor demanded his second loss to Dustin Poirier be ruled a doctor stoppage and not a referee-ended fight.

The Notorious suffered a second consecutive loss to the American in the main event of UFC 264 in Las Vegas.

The Irishman, 32, broke his ankle seconds before the end of the first round.

McGregor’s inability to continue prompted the doctor to call a halt to proceedings, meaning Poirier was awarded a TKO victory.

And the UFC’s first simultaneous two-weight world champion demanded it not be ruled a ref-induced stoppage.

Conor McGregor is a man who knows his worth.

Notorious lost to Dustin Poirier at UFC 264 in spectacular fashion, when he broke his leg during their conquest.

But the Irish MMA star, 32, is adamant that he’s not finished in the UFC after suffering consecutive defeats to Poirier.

McGregor took to Instagram to share an image of himself being stretchered out of the T-Mobile Arena in Las Vegas.

He captioned the photo: “You need people like me.”

IN THE MONEY MAYWEATHER

WHILE Conor McGregor lost out to Dustin Poirier at UFC 264, an old opponent was a winner.

Floyd Mayweather was happy to show off his winnings after placing a £36,000 bet on Poirier to win.

‘Money’ Mayweather walked off with £61,000 in winnings and served special praise for McGregor’s conqueror.

He shared his ticket on Instagram with a special note for Poirier.

Mayweather wrote: “@dustinpoirier, thanks for getting me paid!”

Jake Paul teamed up with Dustin Poirier to troll Conor McGregor after the UFC star broke his leg during his defeat to the Diamond.

Irish McGregor has now lost three of his last four bouts and awaits surgery after being carried off on a stretcher with his horrific injuries.

YouTuber Paul, 24, was among those to mock McGregor, who predicted Poirier would leave on a stretcher, only to go out on one himself.

And then the American added insult to injury by teaming up with the Diamond to continue making fun of the Notorious.

UFC fans believe Conor McGregor broke his leg after just 20 seconds in his defeat to Dustin Poirier on Saturday night.

The Irishman was carried out on a stretcher after he rolled his ankle in the first round of their trilogy bout in Las Vegas, leading to Poirier being declared the winner by first round TKO due to a doctor’s stoppage.

And now a UFC fan on Twitter appears to have identified that in the very early moments of the fight Poirier pointed to McGregor’s leg after checking a kick.

McGregor fought on for another four minutes but Poirier also believes the Irishman’s leg was broken in their very first exchanges.

In his post-fight interview, the American said: “I felt something, for sure. He fractured it on one of the kicks at the beginning of the fight, and then he broke it.

“I’m more than sure of it. He got what he had coming to him. Karma is a mirror.”

He then later added: “You never want to get a win that way, but what happened was the result of checking a kick.”