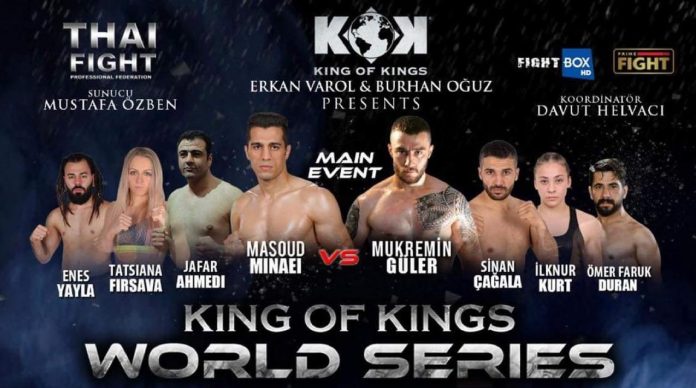 The King of Kings promotion (KOK) visited Turkey for the second time in 2021. The southern city of Konya played host to a night of hard-hitting action that featured impressive ring performances and memorable knockouts.

The opening bout featured two young Turkish unbeatens. Alparslan Balak (3-0) prevailed against Erhan Gömeç (4-1) by first-round knockout. Balrak landed a right that stunned Gomec on the ropes, with a dazed Gomec extending his glove towards Balrak as if he committed a foul. Balrak landed another right that crashed Gomec into the bottom rope before he landed on the canvas. The 70 kg bout was over. All of Balak’s wins are by knockout.

In a another 70 kg battle, Afghanistan’s Muhammed Farsad Moghulzade (6-2) dominated Enes Yayla (12-6) en route to a unanimous decision win. Moghulzade was the quicker and more technical fighter, scoring two eight counts against the Turk while landing a variety of punches, kicks, and knees. He evaded Yayla’s blows and made him pay. Moghulzade looked for the KO but Yayla gamely fought until the final bell.

Women’s fights are a fixture on KOK Turkey events, and this event was no different. In the sole ladies bout of the night, Göknur Yaşın Dündar (5-0) was too quick and powerful for the courageous Beray Elçiçeği (2-1). Dundar snapped Elcicegi’s head back with punches and cracked body kicks en route to a unanimous decision win. The category was 60 kg.

KOK Turkey veteran Gokhan Sever (14-3) was given two eight counts and ate some strong knees and punches from unbeaten Iranian Ali Damak (5-0). Damak won a unanimous decision in the middleweight bout against the smaller (13 cm) Sever, who looked a bit heavy fighting at middleweight.

Libya’s Mousa Benghazi (4-0) scored a spectacular KO against Ömer Faruk Duran (20-5) in a lightweight bout. After stunning a cornered Duran with knees, Benghazi connected with a high kick that put Duran to sleep.

An international lightweight battle between Iraq’s Taha Yasir and Sherzad Haydarov of Turkmenistan was next. Yasir won a split decision after winning the first and third rounds.

It was time for the evening’s main event. The KOK Turkey Tournament Title was on the line between Iran’s Ibrahim Khazaei and Sikar Bedelov of Azerbaijan.

Bedelov connected with a left hook after Khazaei landed a low kick for an early knockdown. Khazaei was badly hurt, getting up before returning to the canvas for more of the referee’s count. The Iranian survived but was quicly in trouble again. Bedelov scored with a couple of rights before finishing the 75 kg match with a left hook that dropped and stopped Khazaei, who was in no shape to continue.

The stoppages continued in the last bout of the night, a lightweight match up. Elnur Omarov made a successful pro debut, defeating Sercan Celik (9-1). Omarov rocked Celik in round one and dropped him with a right uppercut in the second round. The fight was stopped in between rounds.

KOK is returning to Turkey this month on 17 July. The event is being held in Istanbul.

KOK President Donatas Simanaitis attended the event and was awarded a Turkish flag and pair of nunchakus by one of the promoters.

A replay of Tuesday’s event is available for purchase on kokfights.tv.