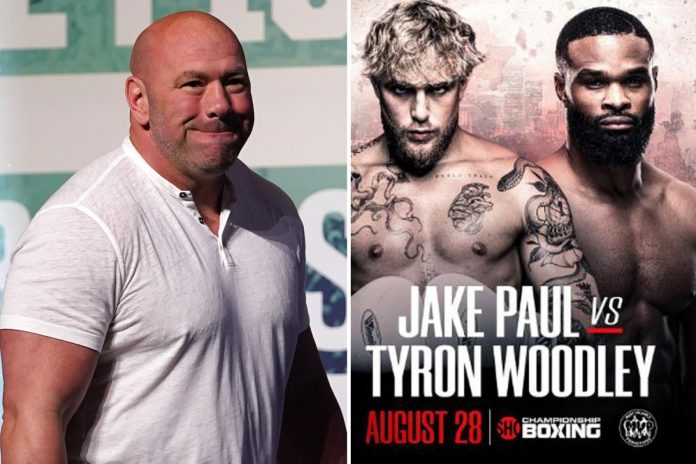 UFC chief Dana White has seemingly buried the hatchet with Jake Paul by praising the YouTuber for accepting a fight with Tyron Woodley.

The hard-hitting Woodley – who was released by the UFC in April – will represent the toughest test of Paul’s brief boxing career.

And White has commended The Problem Child for agreeing to throw down with the vicious one-punch knockout artist.

During an appearance on the Real Quick with Mike Swick podcast, White said: “Tyron Woodley has punching power and obviously he’s put a lot of dudes to sleep in his career.

“But I will give it to [him]. At least he’s stepping in there with a guy who can punch.”

Woodley, 39, has opened up as an underdog against Paul – who knocked out his good friend Ben Askren in April.

The early odds come as no surprise to White, who said: “It has to do with Woodley’s age, and he hasn’t won a fight in three years.”

As far as predictions go, White believes the Woodley that terrorized the welterweight division a few years ago would make light work of Paul.

But after seeing The Chosen One lose his last four on the bounce, the veteran promoter isn’t sure how the fight will play out.

When asked to give his prediction for the fight, White said: “Listen, man. Woodley should knock him out.

“But again, the Tyron Woodley that you talk about that was the champ isn’t the same f***ing guy he was four years ago.”

Despite not having tasted victory in close to three years, Woodley is brimming with confidence ahead of his professional boxing debut.

“Basically, they brought me in to take out the trash. Can’t wait to shut this b***h up.”This is getting done for the culture, the whole MMA/boxing community, to rid this guy of combat sports.”