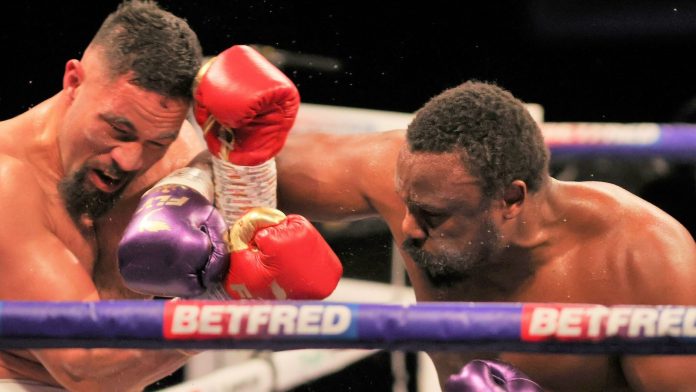 A gruelling heavyweight main event went right down to the wire, with New Zealander Parker just prevailing in the end.

On the undercard, Katie Taylor defeated Natasha Jonas in a thriller, and Chris Eubank Jr returned to action in triumphant fashion.

Follow all of the latest reaction from the fight below…

Joseph Parker climbed off the canvas after a first round knock down to beat Derek Chisora by a split decision.

Andy Ruiz Jr’s has been victorious on his comeback, but the fight against fellow Mexican-American Chris Arreola was not all to plan.

Ruiz was dropped in the second round before outboxing his rival to pick up a wide points win.

Chisora was fuming at the judges’ scoring on his big night.

Nothing but respect between the two as Chisora brings the customary burgers to Parker and coach Andy Lee in the Kiwi’s dressing room.

NOT SO AVERAGE JOE

“It’s difficult because I train hard, I fight, I bring everything and this is the treatment I get from boxing.

Chisora so upset after the bout.

REMATCH ON FURY VS AJ CARD?

The fighters have just shook on it!

Before we go to the judges score cards, I saw it as 8-4 in Parker’s favour despite the early Chisora knockdown.

Tremendous fight. Both threw everything at it.

Chisora produced another 12 rounds, he’s showing no signs of hanging up the gloves just yet.

As for Parker, he’ll be looking to move onto a big fight – but who?

CHISORA VS PARKER – ROUND TWELVE

Chisora finds another burst of energy and he lands a good couple of right hands!

It’s going to be a grandstand finish!

But Parker follows back with a sharp left.

Parker is trying to finish the show and he lands a one-two forcing Chisora back onto the ropes.

Time runs out and it’s heading to the scorecards. WHAT A MAIN EVENT!