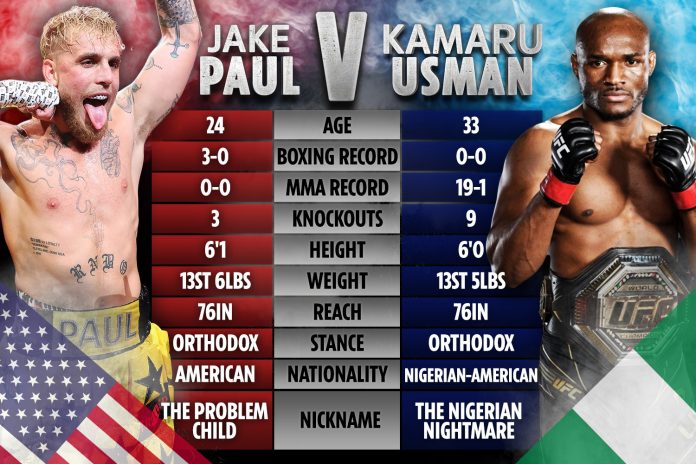 Jake Paul vs Kamaru Usman tale of the tape: How YouTuber and UFC P4P star compare ahead of possible fight

JAKE PAUL has set his eyes on a showdown with reigning UFC welterweight champion Kamaru Usman.

The YouTuber turned boxer was cageside for The Nigerian Nightmare’s destruction of Jorge Masvidal at UFC 261 last weekend.

Usman, 33, revealed he’s interested in facing the social media star in an interview with TMZ.

After getting wind of the UFC star’s comments, Paul said: “Challenge accepted.

“@USMAN84kg if your boss Dana gives you permission to box me and make more money than you ever have, let me know and we can lace them up.

“I promise it will be your biggest pay day.”

But how do the pair stack up against one another?

Well, with both men seemingly keen on sharing the ring with one another, SunSport has taken the liberty to break down the pair’s respective records.

Paul has significantly more professional boxing experience to his name than Usman having had three sanctioned fights to the UFC star’s zero.

But when it comes to overall combat sports experience, Usman’s dwarves Paul’s.

The brash Paul, who made waves last weekend at UFC 261, is an inch taller than Usman at 6’1.

But the pair both have the same reach, with their arms extending 76 inches.

Somewhat surprisingly, Usman walks around one pound lighter than Paul, who tipped the scales at 191lbs (13ST 6lbs) for his showdown with Ben Askren earlier this month.

But the Nigerian-American’s muscle-bound physique blows Paul’s out of the water.

Paul is currently on a three-fight win streak having won all of his outings via TKO.

Usman, meanwhile, has won his last 18 fights in a row – with 14 of those wins coming inside the UFC octagon.

And the former Sanford MMA standout has won three of his last four fights by way of KO or TKO.

Source- Jake Paul vs Kamaru Usman tale of the tape: How YouTuber and UFC P4P star compare ahead of possible fight (thesun.co.uk)