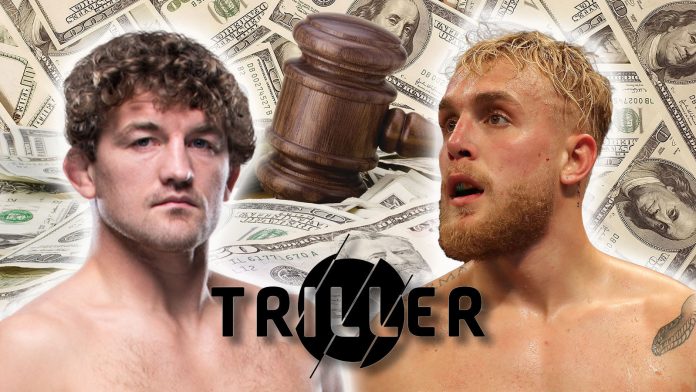 Triller is coming after illegal streamers full throttle after claiming to have suffered $100 million in total damages.

On April 17, over one million people reportedly purchased the Jake Paul vs. Ben Askren pay-per-view boxing event, but Triller is claiming that well over an additional two million people watched the event for free and illegally. The company is not taking this alleged discovery lying down, as Yahoo Sports reports that they will be suing 11 streaming sites and 100 unnamed persons for a total of $100 million. The lawsuit was filed in the U.S. District Court for the Central District of California.

After the initial report, a Triller spokesperson issued the following statement to MMA Fighting, which reads, in full:

“It’s shocking to think a theft so grand can be done so blatantly and brazenly and steal with no remorse,” a Triller spokesperson said in a statement sent to MMA Fighting. “There is zero difference between what they did and walking into a market stealing tons of a product and selling it at a discount in the parking lot. It’s neither civilly nor criminally any different and we are prosecuting to the fullest extent of the law. There were far over 2 million illegal streams, akin to hundreds of millions of dollars. Sites, mostly using Google’s YouTube such as FILMDAILY.COM, ACCESSTVPRO.CO, enONLINE2LIVESTREAM.US, CRACKSTREAMSLIVE.COM, ; SPORTS-TODAY.CLUB, MY-SPORTS.CLUB, BILASPORT.COM, TRENDY CLIPS, MIKE, YOUR EXTRA, ECLIPT GAMING, ITSLILBRANDON, and others are causing significant damage not just to Fight Club but content creators overall.

“People put a lot of hard work time and money into creating a product for the consumer and having it stolen and resold is terribly damaging. The good news is they are not protected by VPN masking or other firewalls as their activities are criminal and grand theft so we will ultimately find them and prevail not just for us but for content creators in general. We intend on working closely with the authorities as well to stop this highly illegal behavior”

UFC President Dana White made headlines yesterday for casting doubt on the PPV buy estimates for Jake Paul vs. Ben Askren, but if this lawsuit is true, the fight should have done over three million total buys instead. It is no secret that illegal streaming has been an ongoing issue for all forms of entertainment, not excluding combat sports. White himself has targeted these pirates, but after only being in operation for five years, Triller is taking a more strong-armed and proactive approach at stamping out this practice than White and the UFC ever formulated.