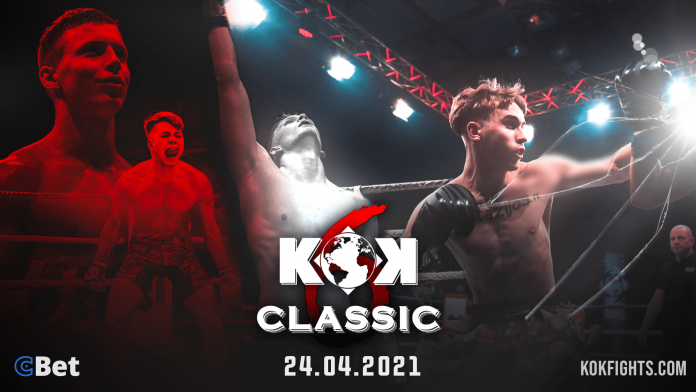 Results for the KOK Classic 6

The King of Kings organization held its sixth KOK Classic event this evening in Vilnius, Lithuania’s capital city. It was another great night of action.

The event showcased some of Lithuania’s brightest kickboxing and MMA talent. 13 fights took place, and the action was broadcast worldwide on FightBox HD and KOK Fights TV.

Lithuanian rapper Iron Vytas was on hand, and entertained the worldwide viewing audience at the beginning of the event.

Popular lightweight Dovydas Rimkus settled the doubts in the main event. “Rimkenzo” knocked out Daniel Szott in the first round of their anticipated rematch.

Labanuskas stunned Povilanskas in round one with knee for an eight-count. Povilanskas got the better of the action in the following rounds. He landed some clean punches (mainly rights) that snapped Labanauskas’s head back.

Gostautas mixed his strikes nicely. He landed some clean low kicks and knees to the body, as well as right hands to the head. Sorochovas fought hard but was outgunned.

-71 kg (MMA Bushido): Osvald Fedorovic (Lithuania) def. Renatas Buskus (Lithuania)-TKO Round 1 (Strikes)
Fedorovic (4-4-1) opened up, and a front kick up the middle followed by a punch dropped Buskus (3-3-1) for a quick win. Buskus had been trying to close the distance. The bout was over in just 15 seconds!

Krukauskas moved around and fired low kicks and lefts as Kaklauskas came forward. Kaklauskas caught up to him in round two, and landed some good combos on a tiring Krukauskas.

“It was a hard fight,” Dimsa said.

Leisans is a battler and escaped some bad positions on the ground. Kondratavicius was too strong for the Latvian.

In round two, a punch stunned Leisans and a follow up knee busted him open. Kondratavicius continued his attack on the ground and the fight was stopped.

Moshnin is quick and has a tricky style. Karosas, who trained with the Lithuanian boxing team, seemed to find his distance and timing as the fight wore on.

A right hand dropped Moshnin in round three, and Karosas also connected with a spinning back kick late in the round. It wasn’t enough to get the win.

Karosas isn’t pleased with the decision.

“Clearly bullshit,” he told Austin after the fight.

“I clearly won the fight,” he said.

“I think second and third round was mine.”

+95 kg (ZST MMA): Arturas Kudresovas (Lithuania) def. Mareks Kovalevskis (Latvia)-TKO Round 1
Kudresovas (7-0) was too much for Kovalevskis, a boxer who accepted the fight with short notice.

Kovalevskis even threw spinning kicks early in the bout. Kudresovas knocked him down with a low kick. He chased the Latvian with a flurry of punches. A right hand got through and knocked Kovalevskis down for the win.

-85 kg: Hynzhu Volodymyr (Ukraine) def. Kestutis Kavaliauskas (Lithuania)-Split Decision
Hynzhu has shown himself as a solid fighter in both MMA and kickboxing. The Ukrainian landed some heavy low kicks and strong left hooks and right hands against Kavaliauskas (3-4). Kavaliauskas landed some good blows during the bout but Hynzhu’s strikes were more powerful.

Last June at the first KOK Classic, Szott gave Rimkus his most difficult fight. The Pole hurt Rimkus badly in the third round and many thought he deserved more than a draw.

This time, Rimkus made sure there was no controversy. He landed a big right hand that dropped Szott and suddenly ended the match in round one.