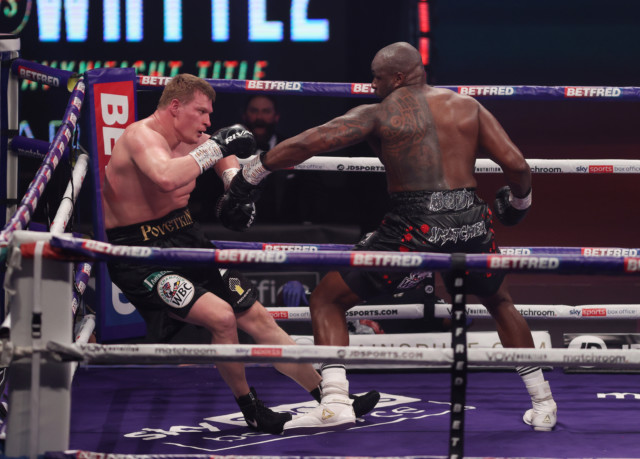 DILL ON THE TABLE?

The Brit knocked out the Russian in Gibraltar in the fourth to gain revenge for his brutal defeat in August.

And The Sun have listed Povetkin, Deontay Wilder, Andy Ruiz Jr, Trevor Bryan and Joe Joyce as five possible opponents for Whyte to face next.

WILDER NEXT FOR WHYTE?

Will Deontay Wilder step up and face Dillian Whyte next?

Still no word from the American on his comeback contest following the defeat to Tyson Fury. That was more than 13 months ago…

ALL WHYTE ON THE NIGHT

Promoter Eddie Hearn confirmed Dillian Whyte is ‘back’ after he avenged his defeat to Alexander Povetkin with a fourth round stoppage victory.

It was a great night not only for Dillian Whyte but also his prospect Fabio Wardley.

The heavyweight moved to 11-0 with a stoppage victory over Eric Molina.

It really was great to see fans back last night, even if it was just 500 spectators.

Dillian Whyte revealed he is yet to meet his four-month-old son due to his intense training camps for the Alexander Povetkin rematch.

Speaking to iFL TV behind the scenes after the fourth-round KO against the Russian, Whyte detailed the extent of his sacrifice.

He said: “My child hasn’t seen me. I’ve never met my son. Never. My son is four months old and I’ve never seen him.

“I call everyday and his mother has been great.

“It’s all good man but I worry because that’s what worriers do. You can’t be a half-term worrier you have to put everything in.”

HEARN ON WHAT’S NEXT FOR WHYTE

“I’d like to see him box quickly again in the summer, maybe go over to the States and have a fight over there,” the promoter said.

“We called for the Deontay Wilder fight for a long, long time. [Wilder] actually DM’d Dillian Whyte and said I will never, ever give you that fight.

“And now he got knocked out and he’s calling for the fight with Dillian Whyte.

“For me that’s a stadium fight, that’s a colossal fight. I’d like to get him back out quickly, maybe to the States for a big fight.

“The ultimate aim for Dillian Whyte has always been to challenge for the world heavyweight title.

Will Povetkin retire after that pummeling last night?

The Russian is 41 now and has been in some real hard fights over the last few years.

He is further away from another world title shot than he was 12 months ago, so what else does he have left to achieve?

What next for Whyte then?

Deontay Wilder and Andy Ruiz are big names being talked about. Whyte also mentioned that he would like to fight Trevor Bryan for the WBA regular title.

That’s the same belt David Haye won back in the day. Would we like to see that?

Dillian waved the Whyte flag after KOing Alexander Povetkin – by grabbing a stool for his defeated opponent in a classy gesture.

Povetkin – whose only two previous pro losses were to Wladimir Klitschko and Anthony Joshua – was getting treatment from his team standing in his corner.

But the Body Snatcher picked up a stool and brought it over for Povetkin to take a seat.

And then he poured water on the battered boxer to help cool him down.

The two fighters clearly had plenty of respect for one another afterwards as they embraced in the ring.

“Now we regroup, we go again and the aim remains the same for Dillian Whyte to get a shot at a world heavyweight title.

“He’ll stay active. He loves to train, he loves to fight, he doesn’t want to rest, he wants to get out and fight.

“If that involves getting out quickly in the summer we’ve got to plan accordingly.”