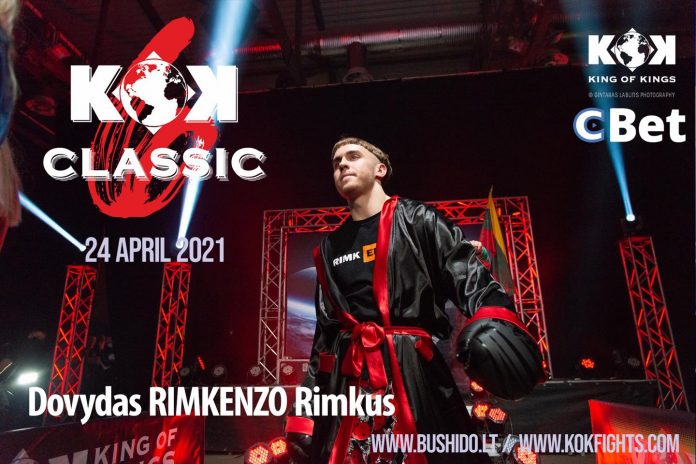 Popular Lithuanian lightweight Dovydas “Rimkenzo” Rimkus is back in action at the KOK Classic 6.

The KOK Classic 6 takes place on 24 April in Lithuania. FightBox HD is televising the event internationally, and KOK Fights TV is streaming the fight card worldwide.

Rimkenzo Crushes “Goliath”
Rimkus was already a fan favorite because of his colorful ring entrances and interviews. He’s becoming a huge star after knocking out Remigijus Virsila last month.

Virsila is a bodybuilder and social media influencer. He agreed to fight Rimkus after the two exchanged words on social media.

Rimkus knocked down the bigger Virsila twice in round one, and finished him with a big body shot early in round two.

The fight attracted worldwide attention, and was also a huge hit in Lithuania. February’s event set pay-per-view records for KOK.

Rimkus’s opponent is to be announced. We’ll keep you updated on the KOK Classic 6 fight card.