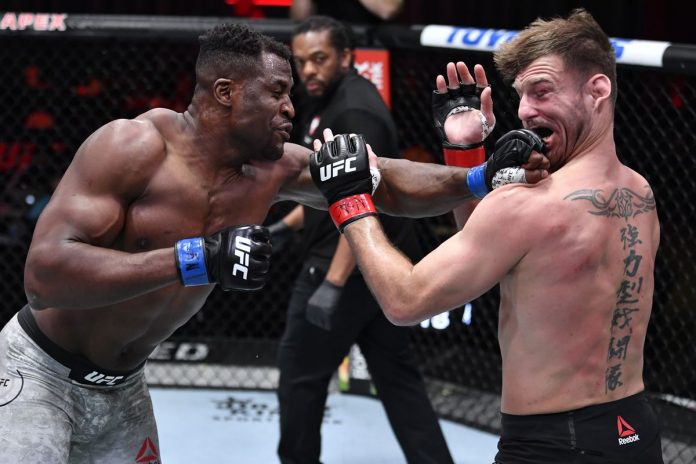 Francis Ngannou needed a little more time than his recent wins, but the result was still the same as he finally realized his dream to become heavyweight champion with a devastating knockout against Stipe Miocic in the UFC 260 main event.

The fight on Saturday night was not only a second chance for Ngannou to win the title, but it was also a shot at revenge after he lost a lopsided decision to Miocic in their first meeting just over three years ago. The rematch was nearly the complete opposite of that fight as Ngannou was clinical with his striking and showed great takedown defense as well.

That all culminated in a huge exchange in the second round that saw Ngannou drop Miocic with a jab and then launch another straight punch that sent the Ohio native crashing to the canvas. Ngannou delivered one more hellacious hammer fist, but the fight was already over as he began his celebration as the new heavyweight king of the world.

“I don’t know if I can find the vocabulary to express this, but it feels so amazing,” Ngannou said with a smile on his face after earning the knockout win. “Even though I’ve been winning fights, I had this thing inside of me that I never released. It was like a promise that I made to myself since I was young. To prove the doubters and the people that thought I was beneath them that it wasn’t my fault. If I ever had the opportunity, I would do great and even greater and that’s what I’m here for.

Showing patience early, Ngannou landed the first big shot of the fight with a huge overhand right that clubbed the heavyweight champion, but Miocic ate the punch without much trouble. Miocic then turned to his wrestling while grabbing onto a leg but Ngannou was quick to defend and he actually returned fire with several hard punches before the fighters worked back to the feet.

While Miocic survived the opening round, he wasn’t producing much offense, and he went back to his corner with a mouse forming under his eye from the damage delivered by Ngannou.

As the second round got underway, Miocic started to move forward a bit more but that proved to be his undoing. Ngannou unleashed a perfectly timed jab that sent Miocic stumbling to the mat and that was all the Cameroonian born knockout artist needed to see to know the end was near.

Ngannou pressed forward, but to his credit, Miocic recovered well enough to fire back with a punch of his own that seemed to land flush. Perhaps that gave him a bit of false confidence, because Miocic then became willing to engage in an exchange, and that provided the opening for Ngannou to land the punch that finished the fight just a split second later.

“He touched me with that punch, but I was stepping back to reset,” Ngannou explained. “He did a mistake following me. That’s when I caught him. We’ve been putting on a lot of work, me and my team.”

After coming up short in his previous bid to become champion, Ngannou can now enjoy the spoils of war as he exorcized those past demons while proving he is the best heavyweight in the sport.

Ngannou has now set himself up for a monstrous showdown against former light heavyweight champion Jon Jones, who is expected to get the next shot at the title.