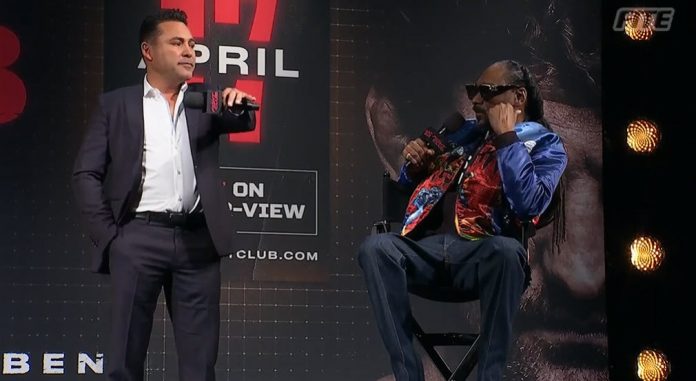 Hot on the heels of Mike Tyson lacing them up vs. Roy Jones last September, 11-time world champion Oscar De La Hoya on Friday announced his return to the ring.

There was no mention of an opponent or venue — or even a weight class — but given De La Hoya’s literal Golden Boy status in the sport, there should be interest. Especially on a Saturday the night before the 4th of July. De La Hoya has not fought since 2008.

It’s also worth noting that, while he often got dinged as a “pretty boy,” De La Hoya was relatively unique among modern champions for not ducking tough opponents — even with his belt(s) on the line. That makes guessing at potential matchups all the more intriguing.

Of course, any fighter out of the ring for over a decade needs a tuneup fight. It is unclear whether this will be that or something more aggressive.

The bout is being promoted by Triller Fight Club, which is co-owned by Snoop and the social media platform co-owned by former Relativity Media boss Ryan Kavanaugh. Triller’s involvement is made even more interesting by the fact that De La Hoya is himself one of the top boxing and MMA promoters in the world. So why partner with another organization?

The official particulars of the arrangement have not been announced, but one answer may lie in the social media and PPV competencies that Triller provides. The company says the Tyson-Jones fight “shattered digital PPV records and became the 8th highest selling Boxing PPV of all time.” That’s no small feat for a relatively new entry in the space long lorded over by more traditional outlets like Showtime and HBO.

Another appeal of the Triller collaboration may be the unique way in which Kavanaugh and co. are seeking to “eventize” fights. For instance, the April 17 fight is surrounded with entertainment, beyond the bought itself. Of course, Jake Paul vs. former Bellator and ONE Championship champion Ben Askren will have buzz, but having Pete Davidson, Snoop Dogg, Mario Lopez, supermodel Taylor Hill and Internet stars Dixie and Charli D’Amelio as part of the team calling the action should be festive in and of itself. Then there are scheduled performances by Justin Bieber, The Black Keys, Doja Cat, Saweetie, Diplo, Major Lazer and the exclusive world premiere of hip hop supergroup Mt. Westmore — featuring Snoop Dogg, Ice Cube, Too $hort and E-40 — performing for their first time ever together.

“This group of headline talent from all areas of music and entertainment will make this the must-watch event of 2021,” said Kavanaugh. “Nowhere else will you be able to see this mix of pop culture, comedy and hip-hop legends and top-notch fights in one place. April 17 will be the new standard not just for boxing, but for a new genre of entertainment and sports that Triller Fight Club is creating and implementing for fans of every demo, genre and age. We’ve already broken pre-sale records, and just wait for what’s to come.”

Finally, De La Hoya may have been attracted to the more inclusive nature of Triller’s business model. Kavanaugh has said he wants it to be an agnostic fight platform willing to work with multiple promoters to put on the best events. Competition among promoters and an unwillingness to collaborate have been a tragic part of boxing’s decades-long spiral. For a fighter like De La Hoya who has always wanted to face the best, having a partner willing to make those deals — no matter the promoter — may be attractive.

The April even will be available via cable, satellite & telco PPV providers, including Xfinity, Spectrum, Contour, Fios, and Optimum in the U.S., as well as leading providers in Canada. It will be streaming on FITE.TV and all FITE mobile, Smart TV, game controller and OTT apps as well as the event microsite hub: TrillerFightClub.com

Triller Network is a consolidation of companies, apps and technologies and the first of its kind leading the move into Internet 3.0. Triller Network pairs the culture of music with sports, fashion, entertainment and influencers through a 360-degree tech and content-based vertical. The Triller Network—which includes the globally popular Triller app used by musicians, celebrities, athletes, and overall culture setters—has more than 300 million users worldwide. Kavanaugh’s Proxima Media owns Triller.