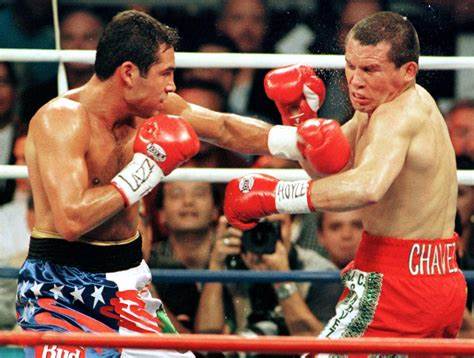 FLOYD MAYWEATHER JR’S record of 50 wins and zero defeats automatically makes him one of the greatest ever.

But not even the great American can compare his record to the likes of Mexican legend Julio Cesar Chavez.

But it was an Englishman who boasts an unrivalled record as SunSport compiled a list of the longest undefeat streaks in boxing.

Rocky Marciano joins the rare list of boxers who finished their careers undefeated.

Nicknamed The Rock from Brockton, he successfully defended his belt six times before hanging up his gloves aged 32.

In eight years as a professional, Marciano amassed an unblemished record, with 43 victories coming by knockout.

Marciano is ranked as the fourth greatest heavyweight boxer in history by BoxRec.

On August 31, 1969, a day before his 46th birthday, Marciano died on board a small private plane when the aircraft hit a tree shortly after takeoff.

A San Francisco native, Andre Ward shocked the boxing world when he announced his retirement from the sport in 2017.

Just 33-years-old, Ward revealed: “I want to be clear – I am leaving because my body can no longer put up with the rigours of the sport and therefore my desire to fight is no longer there.

“If I cannot give my family, my team, and the fans everything that I have, then I should no longer be fighting.”

Ward fought for 13 years in the super middleweight and light heavyweight divisions, winning world titles in both classes.

His last two fights came against Sergey Kovalev, whom he defeated twice to retain his WBA, IBF and WBO light heavyweight titles.

Larry Holmes might be one of the most underrated heavyweight champions of all time.

Holmes went 48-0 during his career and hung up his gloves with a record of 69-6.

Nicknamed The Easton Assassin, he held the WBC Heavyweight title from 1978 to 1983.

During his career, Holmes defended his titles against 19 opponents before finally losing in 1985 to Michael Spinks.

He had notable fights against Mike Tyson and Evander Holyfield in 1988 and 1992.

His final fight was on July 27, 2002, in Norfolk, Virginia, where he defeated Eric Esch by a 10-round unanimous decision.

He boasted a 62-0 record before losing his first professional fight to Sammy Angott in March 1943.

After that loss Pep went on a second streak, winning his next 72 fights to establish himself as arguably the greatest featherweight of all time.

Pep fought into his 40s as he adapted his style to become more defensive.

In 1963, during the early stages of his career, Carlos Monzon lost three fights while still competing in Argentina.

He had 16-3 professional record in October 1964 and he would never taste defeat ever again.

He became a major superstar in South America and highly regarded champion around the world.

Nicknamed Escopeta, or shotgun, Monzon fought as a middleweight and his unbeaten record stretched to more than 80 fights until he retired as the undisputed champion in 1977.

Roberto Duran had one of the shortest unbeaten streaks, but like Willie Pep he went on a second unprecedented winning run.

He went 31 fights without defeat before losing to Puerto Rican, Esteban de Jesus in 1972.

After losing his first bout, Duran won his following 41 fights before losing to Sugar Ray Leonard eight years later in 1980.

Manos de Piedra would establish himself as arguably the greatest lightweight in boxing history.

He was the most dominant pound-for-pound fighter of the 1970s before moving up to welterweight.

Duran capped off his career in 2001 when he fought Hector Camacho, where he lost by unanimous decision.

Duran ended his career with a 103-16 professional record.

Floyd Mayweather Jr is one of just 15 boxers in history to have stepped away from the sport with an unbeaten record.

Nicknamed Money, Mayweather is often referred to as the greatest defensive boxer of all time.

From 1996 until 2017, Mayweather fought some of the sport’s greats such as Oscar De La Hoya, Manny Pacquiao, Saul Canelo Alvarez, Miguel Cotto and Juan Manuel Marquez.

He hung up the gloves as a pro after beating UFC star Conor McGregor in a lucrative crossover bout.

Sugar Ray Robinson dominated boxing during the forties and fifties.

After going 40-0, Robinson suffered his first loss against the Bronx Bull Jake LaMotta in February 1943.

After the loss, Robinson won the following 88 fights before he was upset by Randy Turpin in July 1952.

During that streak, Robinson collected the welterweight and the middleweight world titles.

From 1940 to 1965, Robinson competed in four different weight divisions and ended his career with a 173-19 record.

Arguably the greatest start to a professional boxing career in the modern era, Julio Cesar Chavez dominated by winning his first 89 fights.

Chavez holds the record for the most total successful title defences with 27 and most title fight victories with 31.

His first professional loss came against Frankie Randall in 1994.

Chavez is ranked as the 18th best boxer of all time, pound-for-pound by BoxRec.

The Englishman competed in the flyweight division and was the first world champion.

For four years, Wilde remained unbeaten in boxing until Tancy Lee handed Wilde his first professional loss by way of TKO in the 17th round.