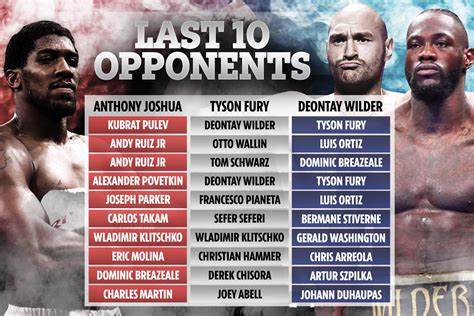 Anthony Joshua vs Tyson Fury: What date will fight take place, where will it happen, how much money will both earn?

ANTHONY JOSHUA vs Tyson Fury is the fight EVERY boxing fan wants to see – so just when will these two Brit superstars get it on in the ring?

Both are coming off big victories, and 2021 should be the year they finally meet face-to-face in the squared circle.

Joshua vs Fury – when will it happen?

According to multiple players close to the deal – this summer.

During the summer of 2020, news had spread that the pair verbally agreed to terms on a two-fight deal for 2021, providing the pair could skate through their next challenges unscathed.

Joshua held up his end of the bargain by knocking out Kubrat Pulev, while Fury looks like he’s managed to escape a trilogy fight with Deontay Wilder.

Eddie Hearn, Joshua’s promoter, has repeatedly touted ‘late May, early June 2021’ as a rough date for the mega-bout.

And earlier today, Hearn confirmed both sides had SIGNED an agreement to fight twice this year.

He told ESPN: “We’d like to get a site deal confirmed in the next month.

“The hard part is always getting everybody to put pen to paper. But this was a major effort from all parties to get this over the line. You had rival promoters, rival networks and rival fighters.

“I just feel that this fight is so big it’s not a difficult sell. We’ve already had approaches from eight or nine sites. The offers have come from multiple countries in the Middle East, from Asia, Eastern Europe and America.

“This is the biggest fight in boxing and one of the biggest sporting events in the world,” Hearn said.

Source- Anthony Joshua vs Tyson Fury: What date will fight take place, where will it happen, how much money will both earn? (thesun.co.uk)

TYSON FURY plans to weigh a whopping 300lbs for his trilogy fight with Deontay Wilder next month. The Gypsy King will renew his rivalry with...
Read more

LOGAN PAUL claimed a moral victory as he managed to take Floyd Mayweather the distance in their exhibition bout. The YouTuber was able to survive...
Read more

Canelo Alvarez now has three of four title belts at super middleweight, following his stoppage of Billy Joe Saunders after an eye injury after...
Read more