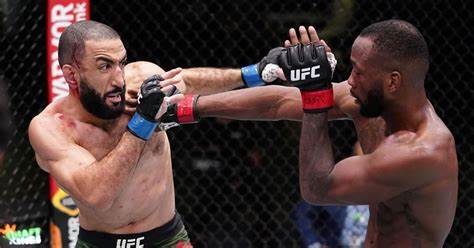 The UFC Vegas 21 main event was off to a solid start but unfortunately ended abruptly in a no contest after the promotion’s #3 ranked welterweight, Leon Edwards, accidentally poked the #13 ranked, Belal Muhammad, in the eye in the second-round. Edwards was doing quite well in his first return to action since 2019, but after that horrible eye poke, Muhammad was unfit to continue. What a bummer for everyone involved, and hopefully Belal is okay.

Edwards started stinging early, using counter punches to catch Muhammad moving forward. Then, a big head kick wobbled Muhammad, causing him to backpedal. Belal was able to grab double underhooks and regain his composure, but back in open space it was Edwards who was in control. The ref briefly paused the fight to warn Leon about extending his fingers. A poke in the eye from Edwards as he was kicking badly hurt Muhammad, instantly halting the match. Muhammad was in agony and clearly unfit to continue.

Leon Edwards vs. Belal Muhammad was ruled a no contest (eye poke) at :18 of round 2: Welterweight