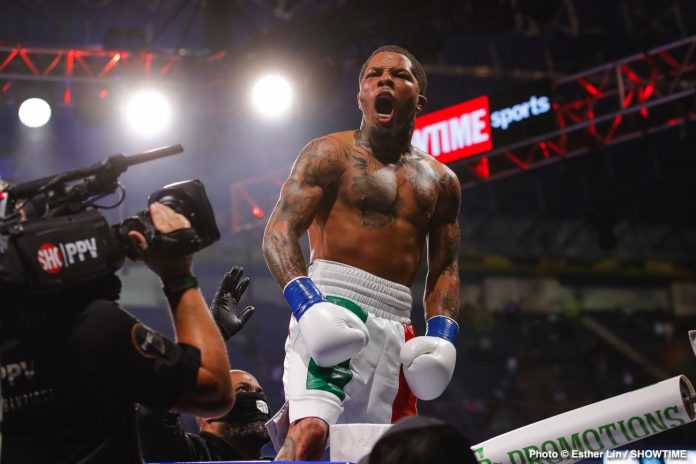 Teofimo Lopez isn’t impressed with Gervonta ‘Tank’ Davis’ decision to move up to 140 to cherry-pick a title from WBA ‘regular’ champion Marios Barrios.

Davis’ decision to try and a three-division doesn’t wow Teofimo because it’s pointless given that he’ll have won all of his world titles against less than great fighters.

It’s not as hard nowadays for fighters to win world titles in multiple weight classes if they’re cunning and make strategic moves to scout out vulnerable belt-holders.

It’s also important to have a fairly powerful promoter to make those fights possible.

Teo sees it as a situation where Tank (24-0, 23 KOs) is going for an easy world title to become a three-division world champion and then says that he should be on the pound-for-pound list.Teofimo thinks the 5’5 1/2″ Tank is too small to be fighting at light welterweight, and he doesn’t take him seriously.

Other than seeing Davis trying to fluff up his resume to make it look better than it actually is, he suspects that he has ballooned up to 190, so it’ll be easier for him to get down to 140 than it would for him to return to 135 or 130.

It would mean a lot more if Tank Davis moved up to 140 and went after the winner of the May 22nd fight between champions Josh Taylor and Jose Ramirez.

If Tank fought the winner of that fight, that would be very impressive for him to beat that guy. But fighting secondary WBA 140-lb belt-holder Barrios (26-0, 17 KOs) doesn’t move the needed.

If you saw how bad Barrios looked in his recent fight against Premier Boxing Champions regular undercard fighter Ryan Karl, you could see that he’s a vulnerable champion.

“Everybody has got to see a pattern, “Teofimo continued about Tank Davis. “WBA at 130, then WBA regular champion at 135, and now they’re trying to go back to the WBA where they become the regular champion with the WBA at 140, so he [Tank] can say he’s a three-division world champion.

“It always looks better on a resume; then they try to get the fact that ‘oh, I should be on the pound-for-pound list because of x, y, and z.’

“So, yeah, I can see the pattern,” Teofimo said about Davis. “You got to do what you got to do.”

It’s a weak move on Tank’s part to go after Barrios rather than the winner of the Taylor vs. Ramirez fight, but maybe Mayweather Promotions don’t fancy the idea of working with Top Rank to set up a fight. They promote both of those fighters.

If Tank’s goal is to pick up paper titles to build up his credentials to get more money from Showtime for his fights, he’s going the right approach.

If Davis is successful, Mayweather Promotions can point out to Showtime that he’s a three-division world champion, and he deserves to be paid well.

A predictable fight for Tank at 147 would be WBA regular’ welterweight champion, Jamal James.

The 23-year-old Berlanga is picking June 12th, as it’s the weekend of the Puerto Rican Day parade in New York.

For Top Rank to grant Berlanga his wish to headline, he’s going to need to fight someone with a pulse for a change.

It’ll look bad if Top Rank finds another body for Berlanga to fight just so that he can keep his perfect first-round knockout streak going artificially.

Yeah, Berlanga can punch, but his opposition is the reason why he’s been able to keep the streak going.

If Top Rank had been like normal promoters, they would have started matching Berlanga against better opposition a long time ago. Once they say that he was knocking out the fodder, they were feeding him so quickly.

It’s not doing Berlanga any good for him to be matched against such dreadful opposition.