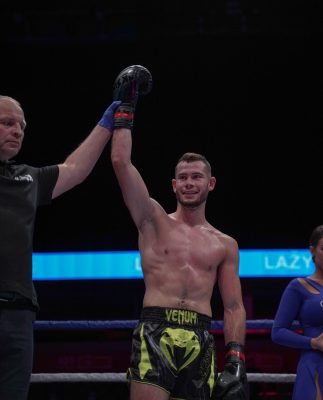 Matas Pultarazinskas: “I Am The Present and Future of KOK”

We caught up with Matas Pultarazinskas, the newly-crowned KOK Interim Featherweight Champion.

Pultarazinskas won the title in December with a solid five-round decision against Lukas Leczycki at the KOK Classic 4.

It was the biggest win of the young fighter’s career. Pultarazinskas (7-1-1) earned his first professional title in only his ninth pro bout.

The young champion returns to action this Sunday February 28 in a three-round super fight against Aleh Moshnin at the KOK Classic 5.

Read on for Matas’s thoughts on winning his first title, his fight against Moshnin Sunday, and he also comments on rival Dovydas Rimkus facing bodybuilder R. Virsila in a special challenge match Sunday.

This Sunday’s KOK Classic 5 takes place in Lithuania and is being televised by FightBox HD and streaming live on KOK Fights TV.

Congratulations. Since the last interview, you defeated Lukasz Leczycki

of Poland to win the KOK Interim Featherweight Title. How does it feel

to win your first KOK belt?

Matas Pultarazinskas: I’m very happy that I have won this belt, there was no other possible outcome. It was one of my main goals to have the belt.

For sure,  I’m the youngest fighter (19 years of age) in KOK to hold a belt, and it shouldn’t be called interim title because Pok Bill (KOK Featherweight Champion) has signed a contract with another organization and rarely fights all around.

So, I am KOK champion without a doubt. Do not forget to buy the PPV this Sunday, because I am going to cement my position as a world champion.

Leczycki seems to have a difficult style. He rushes in sometimes, and

also uses a lot of movement and switches stances.

There were some problems but I adapted to the fight and it was all good. Leczycki is now behind me, and the only way I am looking is forward. I do not want to talk about him-he is the past. I am the present and the future of KOK.

Is he the most difficult opponent so far in your pro career?

Maybe it was. Lukasz was my first 5-round fight, and it was for a title and a good experience. Fighters rarely get to fight more than 3

rounds. Also, there was some pressure, mostly from myself, as my goal is to beat everyone.

This coming Sunday, you face another Polish fighter, Aleh Moshnin. What

are your thoughts on the fight?

I don’t know much about him, so we will see on Sunday. The only thing I am sure is that this Sunday Aleh is going to the hospital, and I am going to celebrate.

A lot of the media attention for Sunday’s event is focused on the grudge match between your rival Rimkenzo and R. Virsila, the bodybuilder and social media star.

fights with other sport athlete who is just a regular guy, and not a

fighter. I believe Rimkus will win by points. He does not have knock

Rimkus is a chicken who runs from the real fight. I am fighting for world titles while he is just being a clown. Good for Rimkus, he should just continue fighting bodybuilders and other celebrities. What a clown he is.

Do you have any thoughts about this fight? Are you still looking to meet Rimkenzo in the ring in the future?

Maybe. Everyone wants to see him lying on the ground. Might as well be me who knocks him out cold. I think I will see him in the ring when this whole Covid situation is going to pass. I want people to see Rimkus suffering.

Thank you for your time. Best of luck to you Sunday. Is there anything

Big thanks to all the fans. All the messages are really important for me. It is what motivates me. I work really hard, and every received message from the fans really matters. I will show you the best fight this Sunday, so hold on.

Source- Matas Pultarazinskas: “I Am The Present and Future of KOK” – KickboxingZ: Kickboxing & BK News