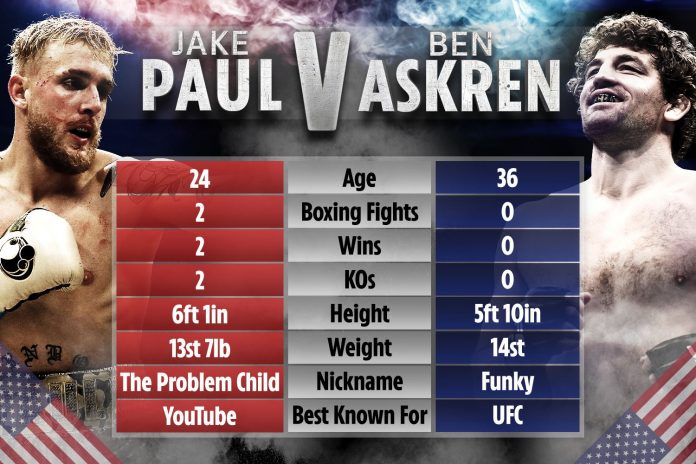 Paul will face the ex-UFC welterweight in his third professional fight on April 17, having won his first two by stoppage.

Brit Jake Bostwick – currently living out in America – was approached by an old gym mate who revealed Paul wanted to spar him.

And the current bare-knuckle boxer and former MMA fighter was left impressed after their three-round session in Miami.

He warned Askren – who has never boxed before and fought primarily as a grappler – that Paul possesses the power to leave him out for the count.

Bostwick told SunSport: “Honestly, I think Jake will knock him out within two or three rounds, I really do, 100 per cent.

“I feel like his boxing’s going to be way better than Askren’s, he’s the bigger man, he uses range well.

“I really think he can knock him out cold for sure.

“With those 10oz gloves, and he boxes how I feel he can, especially by April, I think he can sleep him, cold.

“I believe for sure he’s going to shock people.”

Paul made his professional debut in January 2020, beating internet rival ‘AnEsonGib’ in one round.

He followed it up with a viral KO against ex-NBA star Nate Robinson in November, on the undercard of Mike Tyson’s comeback.

Askren, 36, will mark a huge step up for the social media sensation, coming with a vast amount of experience in MMA before his retirement in 2019.

Paul has been levelled with criticism and scepticism for having lots to say without yet proving himself against an opponent with a fighting background.

But Bostwick revealed the 24-year-old multimillionaire vlogger is working tirelessly behind closed doors to back up his bold claims.

And Paul, guided by coach and former cruiserweight BJ Flores, is proving his worth in the gym, learning quickly on the job.