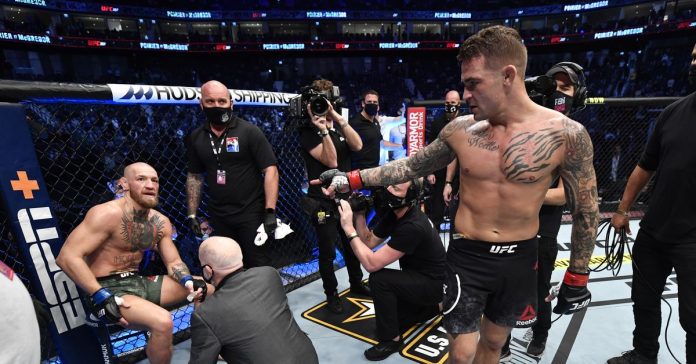 Like many fighters whose calves get kicked, Conor McGregor didn’t realize the damage done until it was too late.

Speaking to reporters after his loss to Dustin Poirier in the headliner of UFC 257 on Saturday, McGregor struggled to process the reversal of fortune that turned a solid performance in the first round into a stoppage via second-round TKO.

“It’s heartbreaking,” McGregor said after stepping up to the podium at Etihad Arena in Abu Dhabi, which hosted the pay-per-view event. “It’s hard to take. The highest highs and the lowest lows in this game.”

Part of McGregor’s reconciliation was accepting how much of a part Poirier’s low leg kicks played in setting up the flurry of punches that handed him the first TKO loss of his professional MMA career.

The former two-division champ and box-office star showed up to the press conference on crutches.

“My leg is completely dead, and even though I felt like I was checking them, it was just sinking into the muscle in the front of the leg, and it was badly compromised, he said. “It’s like an American football in my shoe at the minute. It is what it is. Dustin fought a hell of a fight.”

Poirier was the victim of McGregor’s punches the first time they met in 2014 in a featherweight bout. The loss was the catalyst for Poirier to move up to the lightweight division, where he went on a tear that led to the interim title.

As for the path McGregor will walk, he said he’ll make the necessary adjustments and soldier on. There’s no doubt that part of his work will be to minimize the potential affect of low kicks. Up until the second round, McGregor felt he was trending in the right direction despite giving up a takedown.

“I thought I done well,” he said. “I got up, turned him. I felt alright with him in the clinch, I felt like I was better than him in the clinch. But too little, too late. The leg was compromised, and I didn’t adjust. Fair play to Dustin.”

McGregor is not the first fighter to suffer debilitating effects as the result of calf kicks. The strike affects the peroneal nerve that provides movement and sensation to the leg. Damage to the nerve can cause foot drop, rendering a fighter unable to lift or plant the foot. While it didn’t appear that the ex-champ was hobbled in such a way, he said the situation only got worse as Poirier continued to land the strike.

“I was going to tough her out,” he said. “I toughed it out as much as I could. It was an unusual one. I felt like I lifted my leg up multiple times, but it just sunk into to the muscle at the front, and it was badly compromised. And then Dustin had good, solid defense, as well. So when I was pressing forward with the shots, he was defending well. He fought a hell of a fight, and I’m happy for him.”

McGregor made no excuses for being unable to perform. The setback was instead something to reflect on, and he was still in that process as reporters asked him about what happened. The best answer he could arrive at was that he had simply been outclassed, and he would return to make things right.

“It was a phenomenal performance from Dustin,” he said. “I don’t know what to say. I’m going to go back, chill out, watch the full fight and get a better grasp on it. But the leg was compromised, and I was rushing the shots a little bit. And I didn’t adjust. It’s a bitter pill to swallow. I don’t even know whether I’m that upset. I don’t know what to say.”