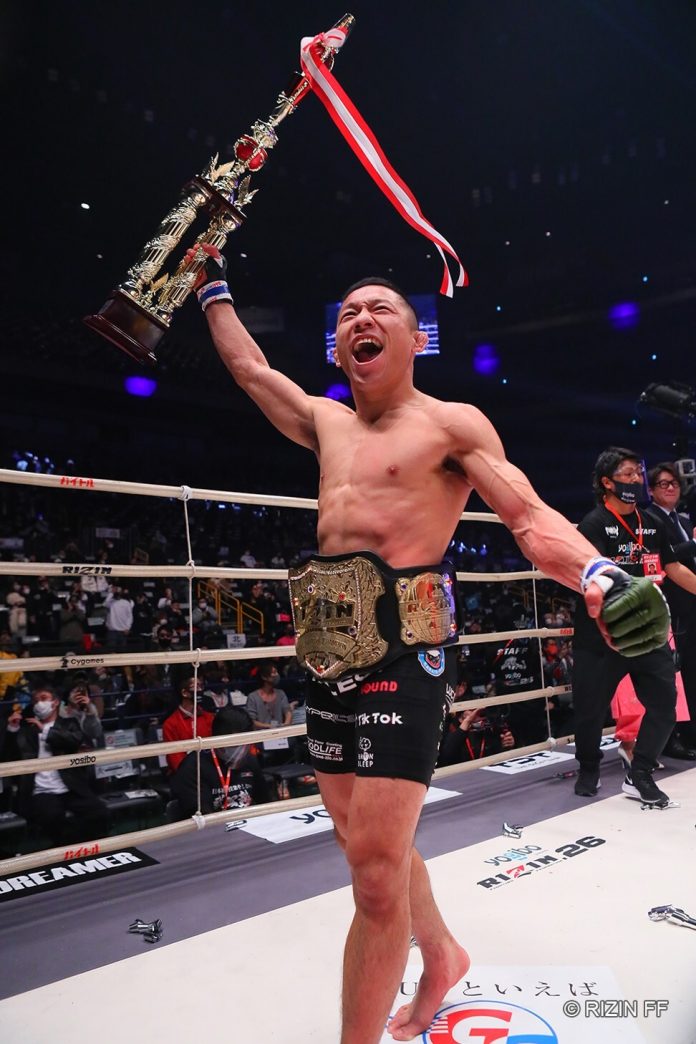 If, of course, your idea of romance is watching a hoard of Rizin’s finest glide towards a ring on a wave of spotlights, seeking to soccer kick each other into oblivion in front of 10,000 socially distanced spectators at the Saitama Super Arena.

Stemming from the glory days of K-1 and the now defunct Pride FC, the fabled end-of-year showpiece has consistently delivered spectacular cards and plenty of iconic moments as the MMA fraternity says sayonara to the calendar year in combat sports.

The man certainly knows how to combine sport and spectacle like no other, and he has grand plans. During the intermission, he announced Rizin 27 will take place at Japan’s largest baseball stadium.

After a wait of 17 years, MMA will be back at the Tokyo Dome for the first time since Pride: Final Conflict 2003.

Here, the main event was a grudge match of epic proportions. The challenger? Kyoji Horiguchi, arguably one of the greatest bantamweights of all time. The 30-year-old came into the fight boasting a record of 28-3 with seven of those wins coming in the UFC.

The champion? Kai Asakura. The 27-year-old arrived in scintillating form having kicked his way to back-to-back first-round triumphs in 2020 – the first of which saw him clinch the vacant title.

Just six weeks later, he booted his way to victory again as he laid out Shoji Maruyama at Rizin 24.

Of course, Horiguchi and Asakura had done this dance before.

In August 2019 at Rizin 18, Asakura pulled off a remarkable upset as he announced his credentials at the elite level. The young prodigy clinically sparked Horiguchi out with a salvo of punches at just 1:08 of the opening round. Despite the landmark win, there was no title on the line that night.

Horiguchi, meanwhile, had not been seen in the ring since. The American Top Team man later suffered a devastating knee injury which meant that he’d have to wait well over a year for a chance to reclaim the throne.

And here it was. The rematch. The ultimate curtain-closer on a year full of heartbreak and high drama.

With question marks lingering over the fortifications of his knee injury during fight week, it was, ironically, Horiguchi who came out launching low kicks after the first bell.

It would be a sign of things to come. Horiguchi, who stands at 1.6 metres compared to the rangier Asakura at 1.7 metres, had trained his sights well, using his lower centre of gravity to swing with bad intentions.

Continuing to look the sharper, deadlier striker in the exchanges, Horiguchi picked his spot again. Another deadly low kick left Asakura wobbled and was followed up with an overhand right. Two more right hooks and the fight was stopped, Horiguchi’s redemption concluded in less than three minutes.

It was a flawless display, and a stark reminder of Horiguchi’s skill – to overcome such a severe injury only to punctuate his greatness with such ease.

“When I got knocked out in my last fight my parents were in tears and I couldn’t forgive myself for making them cry. I hope they are smiling right now,” Horiguchi said. “My body was a wreck when I fought last time, but I’ve spent time to heal and recover so I felt great headed into the fight.”

With the belt now back around his waist, Horiguchi runs the rule over Rizin’s bantamweight division once more. Given both men now boast explosive first-round finishes over the other, a trilogy decider could still be box-office fare.

But after the fight, Horiguchi expressed his desire to be a “champ champ” again, seeking a cross-promotional title fight with Bellator’s 135-pound champion Juan Archuleta.

“My priority is to go get back the Bellator belt I returned. I got my Rizin belt back, and now it’s time to go after the other one,” Horiguchi said.

Meanwhile, the Asakura family will at least still have something to smile about on New Year’s Day. Kai’s older brother, Mikuru, delivered an emphatic finish over Satoshi Yamusu.

The older sibling unleashed a beautifully clean head kick that rattled his opponent in the first round. A swift left hook followed, and it was all over as the 28-year-old recovered admirably from his split decision loss to Yutaka Saito at Rizin 25.

As one of the biggest stars in Asian MMA, he’s certainly not short of suitors with Kyohei Hagiwara staking his claim earlier on having dished out an absolute schooling against Ren Hiramoto.