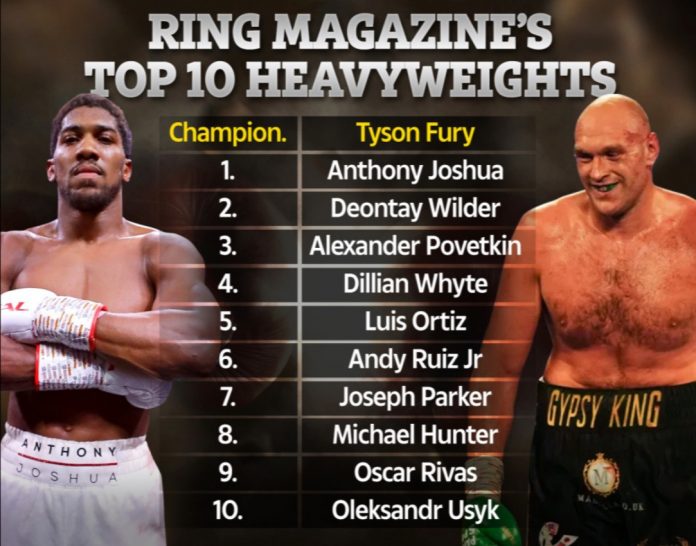 ANTHONY JOSHUA has hatched a three-point plan so he can dominate world heavyweight boxing.

AJ has the WBA, IBF and WBO belts and wants an undisputed double-header with Tyson Fury for his WBC strap.

The big Brit  is already plotting a future  route back to the WBO title  if Oleksandr Usyk makes him drop it to land the £500million two-fight Gypsy King deal.

Usyk, the 33-year-old undisputed cruiserweight king, has been Joshua’s mandatory challenger for that belt since 2018.

He wants a crack at the title or a massive step-aside fee to let the all-English clash take place.

Eddie Hearn — who promotes AJ and the Ukrainian southpaw — is pushing the idea of the first fight being for all four  titles.

The WBO belt would then be dropped so Usyk can contest it — and the two Englishman can settle their rivalry.

Joshua, 31,  already has a Plan A, B and C to get all of boxing’s alphabet soup to himself.

He pondered: “Will people care if I have to lose a belt to Usyk? Will I have to give one up? I am not too sure yet.

“I don’t want to, because it is ‘the road to undisputed’.

“But I know that, when I win, I will go back and fight for that belt anyway — that will be my goal.

“I want to fight Fury, beat him again in the rematch — two difficult hurdles, serious fights — then I will go straight back to try to fight for that title again.”

Usyk told SunSport last week that he is considering letting the all-English battle take place as “it might be a once in a lifetime opportunity”.

But the 18-0 2012 Olympic heavyweight champion  has also got his  team working on the best possible deal.

He said: “I still want to fight Anthony Joshua for the title.

“There are many factors for this fight to happen. My team and all the participants and all their interested parties are already working on it.

“But there are still many  people who wish to fight him as well, like Tyson Fury.”

Deontay Wilder is still trying to force Fury into a trilogy fight, via lawyers in the US — or land a pay-off for ending their rivalry one fight early.

And then Joshua knows it will be up to him to pick between dropping the belt he beat Joseph Parker for in 2018 or shelling out a chunk of his potential £100m purse for Usyk to sit back.

He added: “I don’t know what Fury’s situation is with Wilder. My situation is, do I give up the WBO or will Usyk step aside?”

Hearn said: “I do believe Wilder is appealing in the US courts but we don’t expect that to be a problem.

“Ultimately the big issue for Anthony  is he has a WBO mandatory now. We will be writing to the WBO to say you have an opportunity to be part of the biggest fight in boxing.

“And we’ll be speaking to Usyk to make sure he is happy with a potential resolution.”