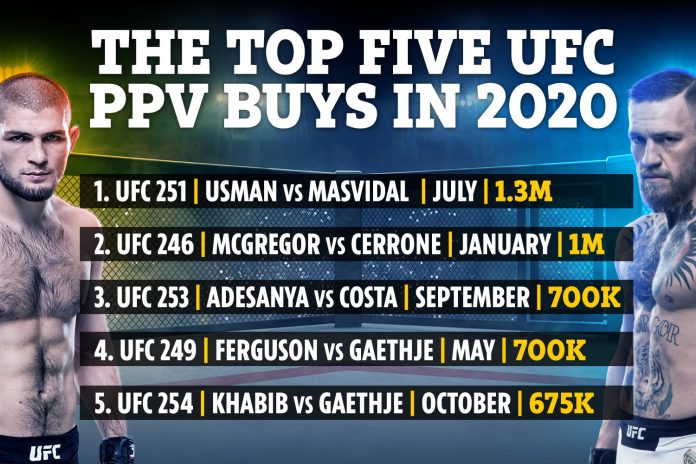 UFC president Dana White is feeling ‘a little confident’ he can persuade Khabib Nurmagomedov to fight on once more when the pair hold talks.

Nurmagomedov announced his shock retirement in October after beating Justin Gaethje at UFC 254.

It was the first fight since the loss of his influential father Abdulmanap, who passed away aged 57 in July after contracting coronavirus.

But beforehand, Nurmagomeov had confirmed it was always their plan to retire unbeaten in 30 fights.

And with the 32-year-old one win away from achieving the goal, White has backed unbeaten Khabib to come back for one final fight.

He told BT Sport: “I think his dad wanting him to get to 30-0 is in the back of his mind, and he wants to achieve that because he knew his father wanted it.

“But we’ll see. Him and I are getting together next month and talk. He might not want to fight, I don’t know the answer to that.

“But I’m a little confident that I can talk him into it.”

With White holding out for Nurmagomedov’s return, it means the Russian has kept hold of his lightweight title.

It denied Conor McGregor, 32, and Dustin Poirier, 31, the opportunity to fight for a vacant or interim version.

The pair are due to headlined UFC 257 on January 23, with White planning to meet Nurmagomedov on the week of the fight to discuss their future.

He said: “No interim title, I’ll know next month, I’ll know when Conor and Poirier are fighting, when he’s (Nurmagomedov) going to fight again, so it all times out perfectly.”

Khabib showdown talks come after he won the BBC’s World Sport Star of the Year award.

And he makes history as the first MMA fighter to be recognised by the BBC.

Nurmagomedov said: “This award means a lot for me.

“Recognition is the one of the biggest motivation in the life, as in the sport.”

Source- Khabib Nurmagomedov to hold UFC return talks with Dana White next month who is ‘confident of return’ amid BBC award win (thesun.co.uk)