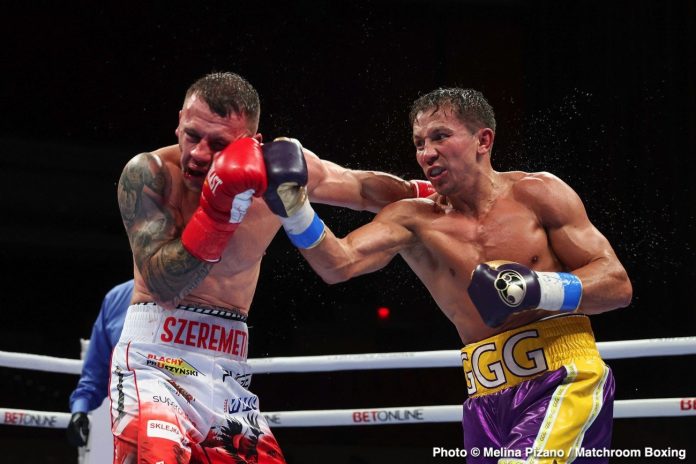 By Matt Lieberman: A shredded Gennadiy Golovkin (41-1-1, 35 KOs) picked up his 21st title defense to break a record on Friday night in stopping previously unbeaten challenger Kamil Szeremeta (21-1, 5 KOs) by a seventh-round retirement.

Fighting behind closed doors at the Seminole Hard Rock Hotel in Hollywood, Florida, ‘GGG’ Golovkin overpowered his IBF mandatory challenger Szeremeta, putting him down in rounds s one, two, four, and seven.

It was after the fourth knockdown of the contest, which resulted from a stiff jab from Gennadiy, that the referee decided he wasn’t going to let the beleaguered 31-year-old Szeremeta come out for the eighth round.

Golovkin was fighting in spurts by the seventh, pouring it on at times, but then backing off and seeing what Szremeta could do. It appeared that Golovkin wanted to stop the over-matched Szeremeta with a single shot, so he was setting up his punches.

Towards the end of the first round, Golovkin hurt Szeremeta with a tremendous right uppercut to the head. Just when it looked like the Polish fighter was going to escape the round without going down, Golovkin tagged him with a scorching left hook that put Szeremeta down hard.

Fortunately for Szeremeta, the round ended when he got back up. He looked badly stunned as he walked back to his corner after the round had ended.

In the second round, Golovkin teed off on Szeremeta, who had nothing to keep him honest with. Halfway through the round, Golovkin dropped Szeremeta with a right hand to the side of the head, which caused him to go down in a delayed reaction.

In the fourth, Golovkin landed a left hook in close while Szeremeta was in a clinch. The impact of the shot dropped Szeremeta like a sack of potatoes. It looked like Szeremeta wasn’t expecting Golovkin to hit him with the kind of shot that he did, considering that he was holding onto him in a clinch.

Golovkin got his body into that hook, and Szeremeta was unable to stay on his feet. Again, Szeremeta barely out of the round. Had Golovkin shown a sense of urgency, he would have knocked Szeremeta out in that round.

At the end of the fourth, Szeremeta looked beaten, his nose swollen, looking like it may have been broken, and his face reddened from the heavy shots that Golovkin had been hitting him with throughout the contest.

In the seventh round, Golovkin landed a stiff jab that bowled the tired and hurt Szeremeta over. Golovkin took his time and didn’t press the action the way he could have after Szeremeta got back up.

In between rounds, referee Telis Assimenios stopped the match and chose not to let Szemeta come out for the eighth.