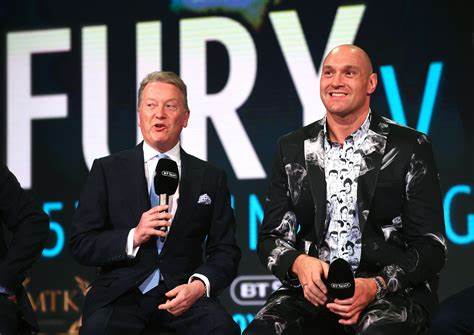 FRANK WARREN celebrated 40 wild years in boxing this week in a rollercoaster seven days that typified his four generations in British sport.

Three days later, Tyson Fury, who Warren took immense personal pride in guiding back from the brink following a family tragedy that still haunts the 68-year-old, was nominated for the Sports Personality of the Year award and had the balls to knock it back.

Warren smashed a nasty cartel to break into the crazy sport, introduced entrance music and ring girls, was shot by a former fighter and has made too many superstars and enemies to name along the way.

But he is still going strong and took the time to run SunSport through six of his best fights, in chronological order only.

I remember everyone standing on their chairs, it was unbelievable, brutal, exciting. But, after Nigel came back from the brink of losing, it ended up being a very tragic fight too.

That fight still shows you the absolute best and worst of boxing. Those two turned their lives around through boxing but they paid some huge prices.

I had gone 15 years without a serious incident on my shows and when it happened it was awful.

I didn’t know how to justify it but the chief medical officer at the time told me ‘if you stop someone else will take your place, if the sport is banned it will happen illegally underground, all we can do is keep trying to make it as safe as possible’.

I questioned whether I would carry on in the sport but have done everything I can to make this sport safer and safeguard these peoples’ welfare.

Nigel did leave me after a while but I think he went on record to say it was a big mistake but I really enjoyed working with him.

We definitely almost came to blows a couple of times, I remember one night in a club specifically and even before the McClellan fight because he thought me and Don King had plotted to have him beat!

I was actually one of the few people to back him to beat McClellan and he did, it’s just a shame what it took to happen.

Bruno was a national treasure even before winning his world title, at his fourth attempt, in this fight.

McCall had stunned Lennox Lewis the year before and so everyone thought he would walk through Bruno.

But I took Frank to watch his first defence against an aging Larry Holmes, one of my heroes, in Las Vegas and we sat there and hatched the plan to beat him.

When Frank pulled it off, the whole place went crazy and we had fireworks for him, it was very emotional.

We booked an open-top to parade around London for the next day and of course it p* down with rain but everyone came out to see Frank, it was brilliant.

It was Naz’s US debut, and everyone told me I was crazy for putting an English featherweight on a New York show, six days before Christmas.

But the place was packed, with celebrities everywhere, both fighters were down three times but, in the end, Naz broke his heart.

Naz was Marmite because the youngsters liked him but the old guard didn’t and that was the same with Muhammad Ali, who my generation adored but our parents found too flash.

Naz was a Sheffield kid from Yemen and I remember horrible situations where people would call him a ‘p***’. But he turned an entire generation of British muslim kids into boxing, which led to Amir Khan and many others, which should always be remembered and respected.

Naz retired at 28, so young, and I often think about that sort of talent burning out early like George Best. He had a brilliant career but I will always feel his talent should have earned him more.

Nobody gave Ricky a chance in this fight, Kostya Tszyu, at this time, was the pound-for-pound No1 fighter on the planet in the same way someone like Canelo is now.

But we got the fight at just the right time and Ricky and his trainer Billy Graham got the tactics spot on.

The Manchester Arena that night was unreal, Ricky was the best ticket seller around because he was so loved all over the country, by Manchester City and United fans.

Ricky has told me plenty of times that that was the best night of his life, something that can never be taken away from him and I am very proud to have been a part of that.

The year before the Kessler fight Jo, Joe boxed Jeff Lacey and everyone said he was going to get battered by this mini-Mike Tyson but I studied him and promised Joe he could beat him with one hand, which he did.

But, for me, the Kessler win was his best performance and that wasn’t the same Kessler who fought Froch three years later, he was in his prime for Joe.

Kessler won the first couple of rounds and we were screaming out before the penny dropped and he changed his tactics and almost stopped him.

We paid a fortune to get Kessler over and had 54,000 thousand Welshmen singing their hearts out, it was a phenomenal performance that Kessler never recovered from, the same as Lacey.

People sometimes label Joe as tricky southpaw who through soft punches, but a few times in his career he showed massive balls to get off the canvas very early against great fighters too. Joe must go down as one of Britain’s finest ever fighters, if not the finest.

It might seem strange to have neither Wilder fight on here but this one was the milestone personally because we, Queensberry and BT Sport, had helped Tyson back from all of his physical and mental problems.

I was a much younger man when my brother Mark committed suicide but I still remember times when Mark called me and I was too busy to give him my attention.

I remember times when I promised to call him back immediately and work came up and it might not have been until hours later and I regret that, still now.

When the chance came around to work for Tyson again everything felt right, we were very good for each other and where he is now is so pleasing because I really care for his welfare.