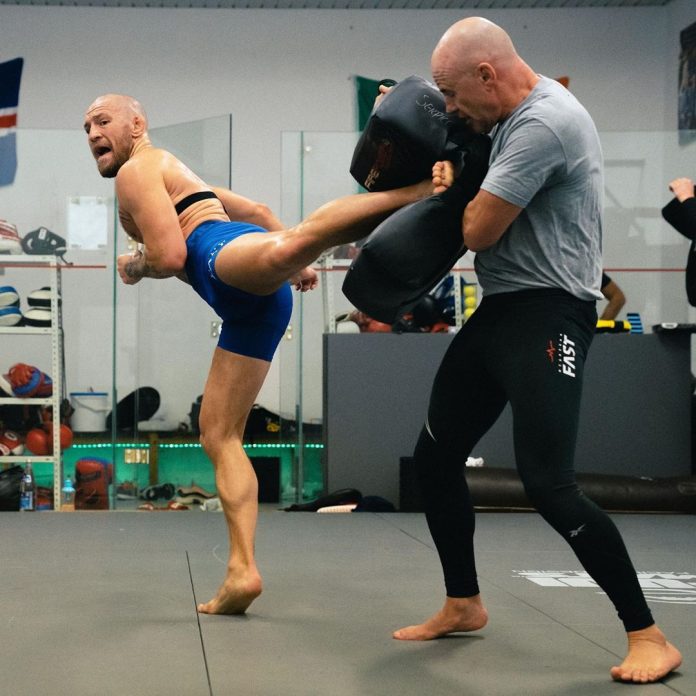 CONOR McGREGOR has revealed the brutal sparring regime he has followed ahead of his UFC return against Dustin Poirier.

The Irishman – who beat Poirier in 2014 – rematches the American on January 23 in a lightweight headliner.

McGregor has been preparing for the fight in Portugal, joined by his team of coaches, nutritionists and sports physios.

And the 32-year-old has put a massive emphasis on sparring in the last month and half, completing the equivalent of 15 UFC title fights.

McGregor posted on Instagram: “Word just back from the team at @claymoreproductions.

“In the last 6 weeks of my training, I’ve completed 375 minutes of sparring.

“This equates to 75×5 minute rounds. Or 15 championship MMA fights.”

“My last fight lasted 40seconds. This is why though.”

McGregor is preparing for his first fight since the start of the year, when he knocked out Donald Cerrone, 37, in round one.

He had spent the summer in retirement, having grown frustrated on the sidelines amid the coronavirus pandemic.

But McGregor never stopped training, and despite the inactivity in the cage, striking coach Owen Roddy described the southpaw as ‘a stone-cold killer’.

He continued: “Coming off the Cerrone camp, he was in great form, he was motivated, he was in a good place, and then he wanted to go on this run throughout the year, and then Covid messed it all up for everybody, but he didn’t stop training.

“He hasn’t stopped. He’s been very active, working all areas of mixed martial arts, and you can see that now.

“He’s in the best shape I’ve ever seen him in my entire life.”