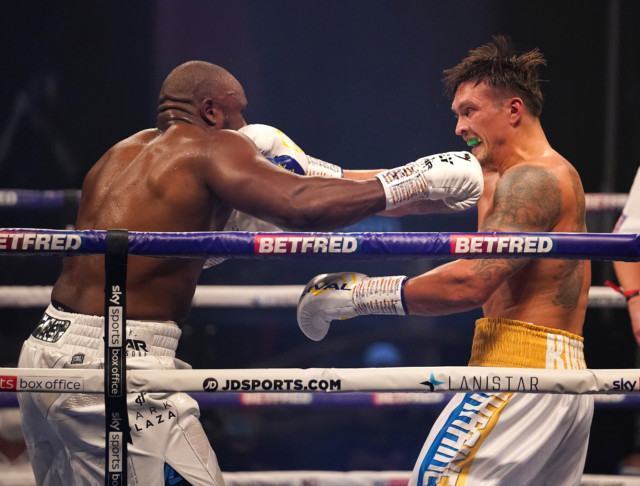 DERECK CHISORA put on the performance of his life but was handed a heartbreaking points loss against Oleksandr Usyk.

One bookie had a Del Boy win as wide as 80-1 and a win against the Olympic champ and undisputed cruiserweight king would have gone alongside Brit icon Llloyd Honeyghan’s celebrated shock 1986 win over Donald Curry.

The Londoner was was a bulldozer for most of the night but also boxed with a brilliant gameplan and poise, waiting until his 42nd fight to start boxing southpaw but the scores were 117-112 and 115-113 twice, all for Ukraine master Usyk.

Chisora enjoyed the dream start, stalking his prey around the ring and hurling hooks into his ribs and head.

Usyk stumbled into the ropes once but didn’t look hurt and he and gym-mate Vasiliy Lomachenko are famously slow starters, which Del Boy promised to gain from.

The success continued into the second, Usyk was skirting around on the ropes and getting tagged with looping shots.

All the MMA training the 36-year-old had done at cage fighting gym was paying off as he bullied the three-stone lighter man in the regular clinches.

Haye teased Usyk’s ringside team before the third started, but the ice-cool Ukrainians warned him it was going to be a long night.

Chisora landed another string of hooks but Usyk was catching them on his gloves and never looked hurt.

One left hook was thrown with such power the Brit spun a full 360 degrees but Usyk missed the chance to counter.

A booming right hand into Usyk’s ribs must have winded and he grabbed a breather moments later when he went down to his knee but the referee called it a slip.

Usyk finally had more success in the fifth, when he finally got busier but even his own team had their main losing on their unofficial cards.

But it was a body shot that was the best moment of the stanza, another howitzer up Usyk’s unguarded ribs.

But Usyk had his best round in the seventh, the bell saved Chisora as the bookies’ favourite was pinging his shaved head up against the ropes.

He didn’t rush back out in the eighth but he banged Chisora with brilliant punches as the 18st veteran began to tire.

Miraculously Chisora roared back in the ninth, tagging Usyk with rights and left to the head and body.

The barnstormer took another twist in the tenth when Chisora’s second wave seemed to waver and Usyk scored with head shots but again the grizzled old warhorse kept swinging.

For three crazy seconds at the start of the 11th it seemed like Chisora switched off, he turned away and took a stroll along the ropes.

He was either playing possum or showboating and it worried his fanclub until he snapped back into the moment.

And every member of Team Chisora leaped to their feet celebrating what they thought was going to be a points decision only to be disappointed.

“I fought his fight, I was expecting that, even a tougher fight.”

Meanwhile Chisora was devastated at the loss, believing he had done enough to win.

The 36-year-old told Sky Sports: “I think I won, 100 per cent, I was pushing the pace, yes I gave a couple of rounds away, but the judges saw it different.

“Pressure was landing, and my body shots. I am just disappointed. You have to take shots, it is a fight game, he did very well.

“I am disappointed with the result, basically gutted. I am just gutted, I am p***** off, I worked hard for this fight.”