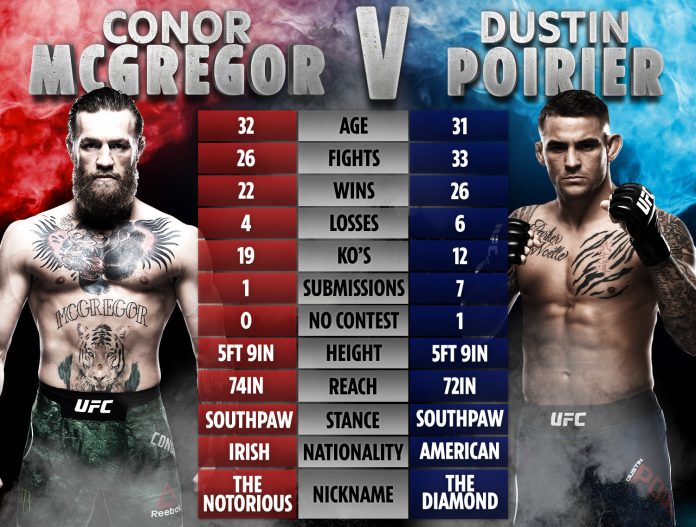 While formal agreements are yet to be signed, a bout between the two seems likely for UFC 257 on January 23.

But a potential sticking point is the weight division they’ll compete in.

The issue was complicated further with McGregor’s coach, John Kavanagh, tweeting last week to say that a fight with both MMA stars ‘hydrated and healthy at 170lbs will be fascinating.’

But UFC president Dana White, while confident a fight will go ahead, said an arrangement not at 155lbs “literally makes no sense”.

He told BT Sport: “The deals not signed yet but in the history of dealing with Conor McGregor, Conor McGregor has never come out publicly and said ‘I accept this fight’ and then not fought and turned down a fight. I expect the fight to go on.”

When pressed on the weight division the fight should be at, White was adamant.

He said: “I’m not putting on a friggin’ multi-million at a catchweight that means nothing.

“It literally makes no sense.

“There are plenty of organisations that put on fights that make no sense. You can go and watch those fights every weekend. That’s not what we do here.”

The decision could have wider implications with current champion Khabib Nurmagomedov set to fight Justin Gaethje this weekend at UFC 254.

LEON EDWARDS incredibly survived a last minute onslaught from a bloodied Nate Diaz to win their UFC 263 war. The welterweight pair made history as...
Read more

“The Notorious” Conor McGregor vowed “world domination” recently, and we are beginning to see what that looks like. In Forbes’ 2021 highest-paid athletes list released earlier today, Conor McGregor...
Read more

I’ve got bad news for all the MMA fighters lining up to fight YouTube boxer Jake Paul, particularly the ones still under contract to UFC. Dana White has...
Read more