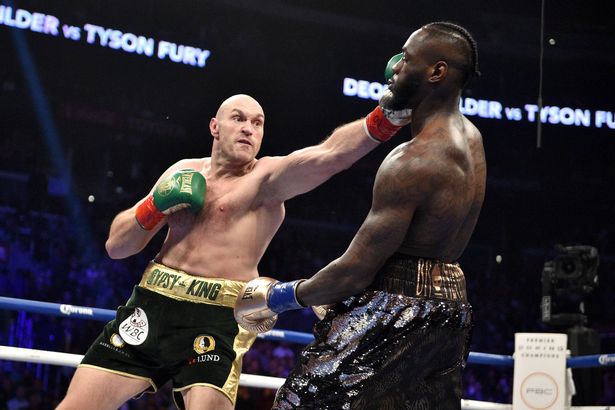 The trilogy fight between WBC champion Fury and the Bronze Bomber was reported to be off after the expiration of the rematch clause, paving the way for the Gypsy King to face Anthony Joshua with all four heavyweight belts on the line

Tyson Fury’s trilogy bout with Deontay Wilder was reported to be off on Saturday, but Wilder’s camp swiftly denied those suggestions.

An apparent cancellation was thought to be paving the way for the Gypsy King to face Anthony Joshua in a super-fight in 2021.

Fury is scheduled to face Wilder for a third time after grabbing the American’s WBC heavyweight belt with a stunning TKO victory in February after their first fight ended in a draw last year.

With Wilder’s rematch clause now expired, Fury was instead reported to be defending his title in a warm-up fight before Christmas as he prepares for the first of two potential clashes with Joshua next year.

As first reported by the Daily Mail, sources have confirmed the trilogy fight between Fury and Wilder has been cancelled.

Instead of fighting the Bronze Bomber in Las Vegas, the Gypsy King may now face AJ at Wembley in the spring.

However, the venue of the fight is subject to the level of coronavirus restrictions in force and the bout may move to the Middle East or China if fans will not be able to attend.

With all four major belts on the line, the fight to determine the first undisputed heavyweight champion since Lennox Lewis relies on neither Brit suffering a shock defeat this winter.

The only other potential obstacle to the fight occurring would be Oleksandr Usyk approaching the WBO to enforce his right to a mandatory title fight with Joshua if he beats Dereck Chisora in their London bout on 31 October.

However, AJ could chose to vacate the belt in favour of a fight with Fury which is likely to earn both fighters nine-figure sums and captivate an audience from across the globe.

Meanwhile, Wilder is struggling to recover from a bicep injury suffered in his defeat to Fury ahead of the contractual deadline for the third fight, believed to be ‘in a very few weeks’.