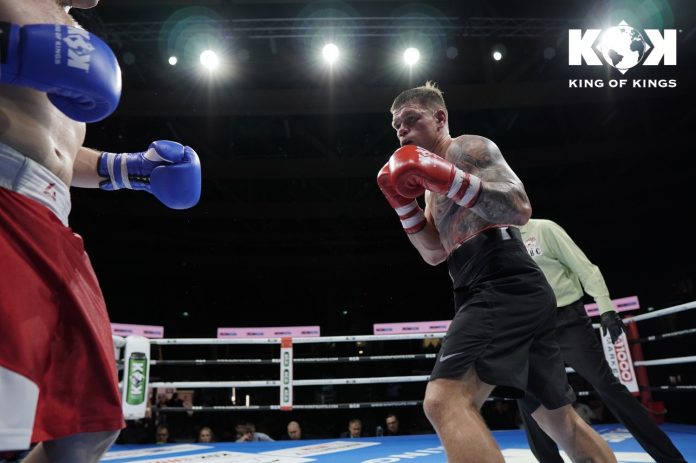 The King of Kings promotion brought professional combat sports to Estonia for the first time since the coronavirus pandemic with an event Saturday night at the Tondiraba Ice Hall in Tallinn.

The lively crowd in attendance and international viewing audience were treated to an entertaining night of action featuring KOK Kickboxing, professional boxing, and MMA.

Ott Remmers of Estonia captured the KOK WGP 2020 in Tallinn tournament title with a victory over Finland’s Niko Korventaus.

Korventaus advanced to the finals despite losing in the semifinals by extra-round decision to Sergei Makejev. Makejev injured himself during the win, and was unable to advance to the finals.

Remmers had an easier time in his semifinal round, defeating Arnas Valiukaitis when Valiukaitis was unable to continue after the first round.

Remmers, a southpaw, circled and landed some clean inside low kicks to the Lithuanian’s left leg, and the fight was halted before the start of the second round.

In the final, Remmers again used his inside low kick attack to claim victory. Korventaus had expended a lot of energy in his semifinal bout against Makejev, and had no answer when Remmers began to score with the low kick.

Korventaus went down after a couple of hard low kicks, and the match was waved off. Remmers, who previously won tournaments in Yakuza Fight and The League II, added the KOK GP 2020 in Tallinn title. He also receives an automatic top-10 contender ranking, and is eligible to fight for the KOK World Title.

James got the crowd going with his ring entrance, which featured an entourage waving Nigerian flags. Once the bell rang, the powerfully-built Ravlusevitts took control.

Ravlusevitts pressured the taller James, and landed the more telling blows. He scored knockdowns in all three rounds to earn the unanimous decision, although James showed courage by continuing to fight back despite being fatigued and outgunned.

Mirko Moissar, one of Estonia’s most popular fighters, had a hard-fought draw against Ukraine’s Artem Liashevych in the co-main event. Scores for the match were 60-56, 57-57, and 56-59.
KOK Heros

In a ladies kickboxing match, local favorite Sigrid Kapanen defeated Finland’s Miina Sirkeoja by unanimous decision. It was a well-contested match, with Kapanen landing the more effective blows to win the decision.

Sergei Strinza was too strong for Ilya Minin in the sole MMA match of the evening. Strinza took down Minin repeatedly, and gained full mount before finishing Minin with a choke in the second round. Minin, nicknamed “The Dancer”, had the night’s best ring entrance, showing some impressive dance moves on the way to the ring.