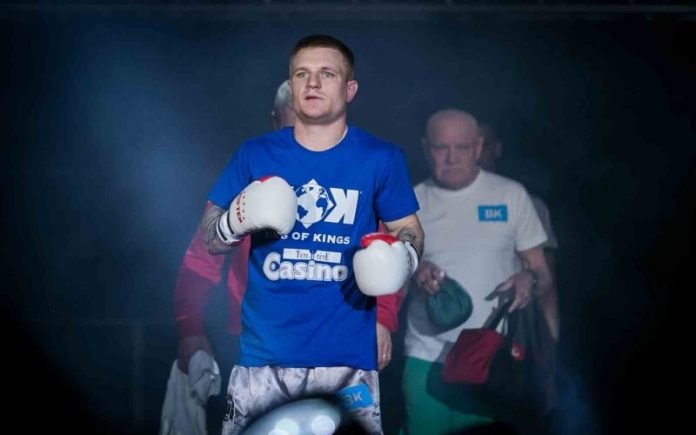 The arena audience, limited in compliance with government regulations, was treated to a huge night of action featuring KOK Kickboxing, MMA, and Dream Boxing.

Part I
The opening match was fought under ZST MMA rules, where head strikes on the ground are not permitted. Tauras Ciuplys and Danila Mittiukov fought to a draw after two four-minute rounds. It was hard to separate the fighters on points, with Cipulys doing better on the feet and Mittiukov showing the better technique on the ground.

The second match was a KOK Kickboxing rules bout between two 18-year-old prospects in the 62 kg category. Danas Antanavicius (1-0-1) and Airidas Mikalauskas (0-1-1) fought to a draw. Antanavicius pasted his rival with left hands and low kicks regularly, while Mikalauskas was able to flurry effectively at times.

Lukas Banevicius (4-0) remained unbeaten with a split points victory over debuting Egidijus Labanauskas (0-1). The 18-year-old Banevicius is building momentum, with three wins in a row at KOK Classic events.

Unbeaten MMA prospect Erikas Golubovskis (5-0) was too skilled for late replacement Vladislav Stefanovic (1-1). Golubsovskis landed some good strikes and controlled the action before submitting Stefanovic late in round two with a triangle choke from the mount position.

Armin Riedl (2-0) of Germany defeated Samuelis Sorochovas (1-1) in a battle of 18-year-old youngsters. Sorochovas had the better of the action late in the match but it wasn’t enough to win the judges’ favor.

Hubert Dylewski of Poland snapped a recent losing streak with a unanimous points win over Lithuania’s Aurimas Krukauskas (2-2). Switching between orthodox and southpaw, Krukauskas threw a lot of unorthodox punches and attempted spinning back fists, and his gas tank was low late in the fight. Dylewski landed some good punches and knees with an exhausted Krukauskas on the ropes but couldn’t land a big shot to put him down.

Ramaska knocked Fedorovic down with a one-two combination, and sunk in a choke from mount after a scramble on the ground. Official time was 1:13.

“Thank you very much. I’m so happy for that belt, and I think it’s my beginning,” Ramaska told commentator Daniel Austin after the bout.

Part II
Vitas Karosas (2-0-1) blitzed Germany’s Mehdi Ebadi (1-1) with punches in round one and seemed a punch or two away from finishing him. Ebadi somehow lasted the distance in a bout that became sloppy as it wore on. Karosas was the winner by unanimous decision.

Dominikas Dirkstys (1-0-1) picked up his first win after a draw at the inaugural KOK Classic in June. Dirkstys won a unanimous decision against Linas Andrijauskas.

Pultarazinskas, Rimkus to Battle in November
In his first fight back from injury, rising star Matas Pultarazinskas (6-1-1) was held to a draw by Poland’s Lukasz Leczycki (7-5-2).

The young Lithuanian landed some strikes here and there but had difficulties with Leczycki’s unorthodox style. The Pole uses a lot of feints and upper body movement and rushes in at times.

After the bout, Pultarazinskas said he thought he deserved the victory.

“I think I definitely won this fight. I can’t leave it to the judge,” he told Daniel Austin.

“Next time I have to knock my opponent out.”

After the bout, Rimkus and Pultarazinskas faced off in the ring. The two popular young fighters will meet on 14 November in a battle to see who’s Lithuanian top young kickboxer.

Dream Boxing
The last three bouts were all boxing matches. In a rematch of a bout he previously won by decision, Mindaugas Gedminas was held to a draw by Vytautas Balsys.

The Lithuanian earned the Dream Boxing Baltic Title with a six-round decision against Semjon Kamanin of Estonia.

Petrauskas pressed the taller Kamanin, who used a hit and move strategy. Petrauskas connected with some solid punches when he caught his opponent against the ropes, but Kamanin absorbed them well and fired back, showing his grit.

There were no knockdowns, and Petrauskas seemed satisfied with his performance in the post fight interview.

“I do my best work. What I can do,” he told Daniel Austin. “Good defense.”