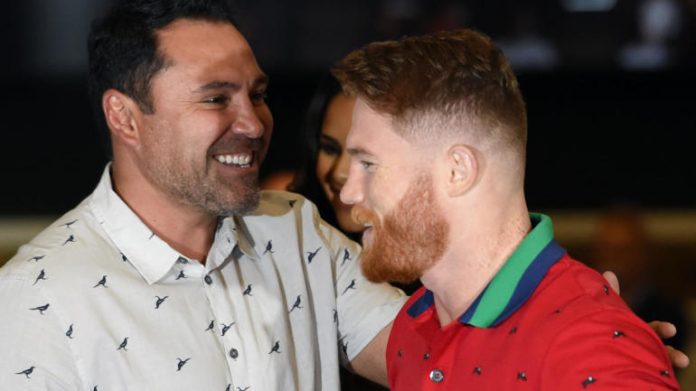 The complaint was first reported by The Athletic, which obtained a copy of the 24-page lawsuit stating Alvarez (53-1-2, 36 KOs), currently ranked as the top pound-for-pound boxer in the world by CBS Sports, is seeking at least $280 million in damages based on what is still owed to him (plus lost sponsorship and gate revenue) from the $350 million deal he signed with DAZN in 2018.

“I’m the pound-for-pound number one in the world,” Alvarez told The Athletic in a statement. “I’m not scared of any opponent in the ring and I’m not going to let failures of my broadcaster or promoters keep me out of the ring. I filed the lawsuit so I can get back to boxing and give my fans the show they deserve.”

The lawsuit comes off the heels of more than a year of distrust and bickering between Alvarez and his promoter, along with a recent impasse with DAZN that has made the prospect of the Mexican icon’s return in 2020 increasingly unlikely.

The 30-year-old Alvarez saw his proposed May return against 168-pound titleholder Billy Joe Saunders canceled due to the coronavirus outbreak. After discussions for a September return fell apart largely due to the lack of a live gate, rumors of a November return hit a dead end when it came to light DAZN, claiming Alvarez was violating the terms of his deal by not seeking a “premier” opponent, reportedly offered half of his guaranteed $35 million purse per fight.

Respect box? Subscribe to our podcast — State of Combat with Brian Campbell — where we take an in-depth look at the world of boxing each week, including a complete breakdown of the Canelo/DAZN saga with Rafe Bartholomew below.

Alvarez was willing to compromise, according to the complaint, but DAZN failed to present a new offer. The all-sports streaming app has been slow to return to a full-time boxing schedule during the quarantine amid recent layoffs after an aggressive 2018 launch that saw DAZN boldly declare the death of traditional pay-per-view.

The crux of the division between Alvarez and DAZN appears to center upon the fighter’s unwillingness to accept a trilogy bout against fellow 160-pound champion Gennadiy Golovkin after their first two all-action fights, which aired on HBO PPV, each produced more than one million buys. The reason for the divide apparently has more to do with the language of the contracts.

The personal services contract Alvarez signed is with Golden Boy and not DAZN itself. Therefore, Alvarez believes that promises made by the promoter to DAZN that a third Alvarez-Golovkin fight would be delivered fall solely on Golden Boy.

While DAZN didn’t respond to attempts at a comment from The Athletic, Golden Boy denied any promises were ever made.

“Nobody from Golden Boy ever promised anyone that Canelo would fight any specified opponent,” Golden Boy spokesperson Stefan Friedman told The Athletic. “We simply agreed to put on the kind of premier, history-making fights we worked on together in 2019. Canelo’s beef is with DAZN. They’re the ones refusing to honor the contract.”

Prior reporting from The Athletic revealed Golden Boy was contractually obligated to deliver one “premier” opponent for Alvarez to face on DAZN each year. Not only did DAZN determine both Saunders and fellow unbeaten super middleweight titleholder Callum Smith didn’t fit the “premier” label this fall, DAZN determined the same for Alvarez’s 2019 opponents — Daniel Jacobs and Sergey Kovalev.

According to the lawsuit, Alvarez believes DAZN is using the argument over “premier” opponents, which he claims was previously undisclosed, as excuses to get out of approving and paying him for the remainder of his deal. He also alleged that Golden Boy breached its fiduciary duty and intentionally misled him on its own deal with DAZN.

Alvarez’s legal team, the California-based Maloney Firm, requested Golden Boy find a new broadcasting partner for Alvarez’s fall return. According to the court document, Golden Boy told Alvarez it was talking with potential broadcasters but that a plan was never presented to him.

Alvarez currently holds the WBA middleweight title and a secondary WBA belt at 168 pounds. He also vacated the WBC title he won at 175 pounds by knocking out Kovalev.