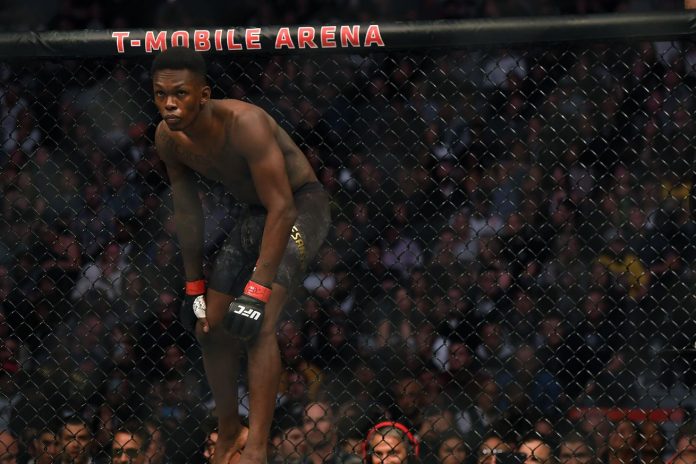 UFC middleweight title challenger Paulo Costa went to great lengths to sell the fans on what his fight with Israel Adesanya will look like, but the champ couldn’t care less.

A video featuring a Costa’s training partner, Vanderlei “Toquinho” Goncalves, as a cowardly stand-in only proved to Adesanya that he’s getting in the challenger’s head.

“It doesn’t really bother me,” Adesanya said on Thursday during a virtual media day in support of the middleweight title fight, which headlines UFC 253 on Sept. 26 in Abu Dhabi. “He can make any kind of tapes that he wants to make. I’m just going to keep doing me, like I always have.”

Adesanya and Costa have gone round after round in the media, and even got within a few dozen feet of each other at UFC 243. But it’s never been more than part of the plan for the champ.

“I’m just enjoying poking the bear as he wallows away in his own f*cking piece of sh*t,” Adesanya said. “Let him do him, and I’m going to keep doing me. I’m not bothered.”

Adesanya has called the fight one for the “casuals” based on Costa’s imposing physique, which he’s repeatedly claimed is enhanced artificially with drugs.

Costa, in turn, has denied the charges and accused the champ of running from him after a delay to their fight due to a surgery he underwent for his bicep.

Adesanya hasn’t changed his opinion that Costa is doping, but used his first title defense against Yoel Romero – and took a sideways swipe at the recent title challenger – to illustrate his ultimate stance on the issue.

“But some things are not being spoken for that should be spoken for, but nobody’s asking the right questions. It doesn’t bother me. I beat Romero. If something comes out and he popped, I still beat him when he was juicing. I said this before: I’m going to pop [Costa] before [the U.S. Anti-Doping Agency] does, and I plan on doing just that.”

On his road to the title and during his reign, Adesanya has outsmarted some of the best to compete at 185 pounds. When he looks at Costa, he doesn’t see the challenge that others – even his promoter, UFC President Dana White – anticipate when they meet in the octagon.

“Yeah, he’s not the best striker I’ve fought, but he’s dangerous, though. That’s one thing you have to remember. But he has to remember, so am I.”

If successful against Costa, calls for a superfight are likely to intensify for Adesanya. Dominant champions always take center stage in fantasy matchmaking, and with so many of them trying out new weight classes, the possibility is a perennial issue on the minds of MMA fans.

Even though he’s headed to heavyweight, recently vacated light-heavyweight champ Jon Jones is a no-brainer for a future showdown. But Adesanya believes he has a lot of work to do before he starts to entertain that option.

“I still have that in mind, it’s still part of my plan,” Adesanya said. “But let me ask you this, how many years has Jon Jones been in the UFC? And he only just moved up in weight, right?

And right now, everything is going according to plan.