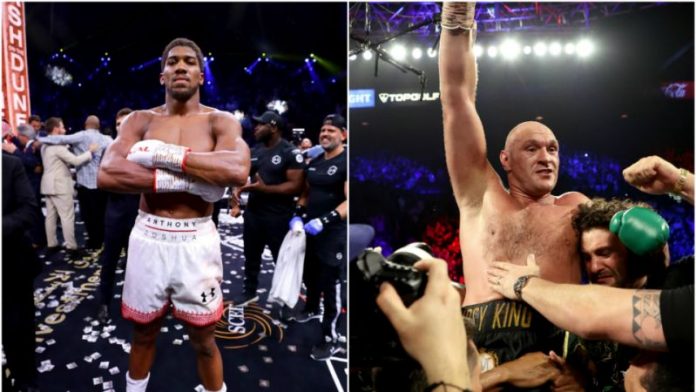 WBC president Mauricio Sulaiman has confirmed Tyson Fury will have “no restrictions” placed on him as the governing body’s heavyweight champion, clearing the way for a unification fight with Anthony Joshua.

Fury claimed the title in February with a sensational stoppage win against Deontay Wilder, though the pair are due to meet again.

The WBC had stated Dillian Whyte would be the opponent for a mandatory defence by their champion in early 2021, provided he came through against Alexander Povetkin on Saturday.

However, Whyte saw his title hopes disappear when he was on the wrong end of an upset result, removing a potential hurdle standing in the way of a showdown between Fury and Joshua.

“We don’t speculate, but the time limitations which were put by the WBC board, which had Dillian Whyte won, the winner of the third Fury-Wilder fight has to fight without an intervening bout against Dillian Whyte,” Sulaiman told Sky Sports.

“That now has changed. Dillian has lost, so there are no limitations at the moment for the winner of Fury-Wilder to do any fight whatsoever.”

He added: “In the WBC, there will be no restrictions whatsoever right now.

“An ultimate unification would be something that everyone would like to see. It’s a matter that brings boxing to the highest level.”

It was announced in June that Fury had reached an agreement over a two-fight deal with Joshua, who holds the IBF, WBA and WBO belts.

Meanwhile, in a video posted on social media on Monday, Whyte reiterated his desire to activate the rematch clause in his contract with Povetkin, who was knocked down twice before producing a stunning uppercut to triumph in the fifth round.

“I’m safe and sound. Congratulations to Alexander Povetkin for a great fight, I look forward to doing it again,” Whyte said in the message.

“It’s heavyweight boxing – it happens. When you fight good fighters, you win some, you lose some.

“I’m all good. I’m ready for the rematch, hopefully everybody can get the rematch done for November, December time. I spoke to Eddie [Hearn] this morning and he’s on it.”