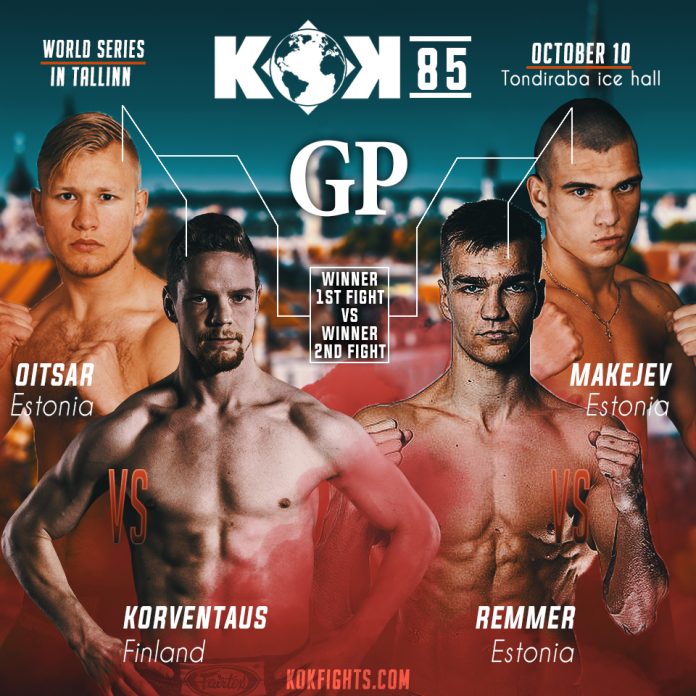 The King of Kings organisation (KOK) announced a four-man GP tournament will take place at KOK 85 on 10 October.

KOK 85 takes place at the Tondiraba Ice Hall in Tallinn-it’s KOK’s first visit to the Estonian capital in two years.

The tournament is being held in the KOK welterweight (-77 kg) category. Under new KOK championship rules established in May, the tournament winner automatically receives a top ten ranking and is eligible for a world title opportunity.

The four fighters competing for the KOK 85 GP title include Finland’s Niko Korventaus. Korventaus is moving up in weight from lightweight (-71 kg), where he defeated Lithuania’s Matas Grubliauskas and battled contender Mindaugas Narauskas to a draw.
Korventaus faces Estonia’s Andres Ditsar in the semifinal round.

The other side of the bracket features an all-Estonian clash between two returning KOK veterans when Ott Remmers faces Sergej Makejev.

Remmers has won tournament titles at the League 2 event and in the Yakuza Fight organisation. He’ll look to add the prestigious KOK GP tournament title to his resume against Makejev, also a local favorite.

More fights for the KOK 85 event will be announced in the coming weeks.

KOK 85 will be broadcast live on the FightBox HD network to over 60 countries. FightBox HD is also available globally via a subscription to Film Box Live.