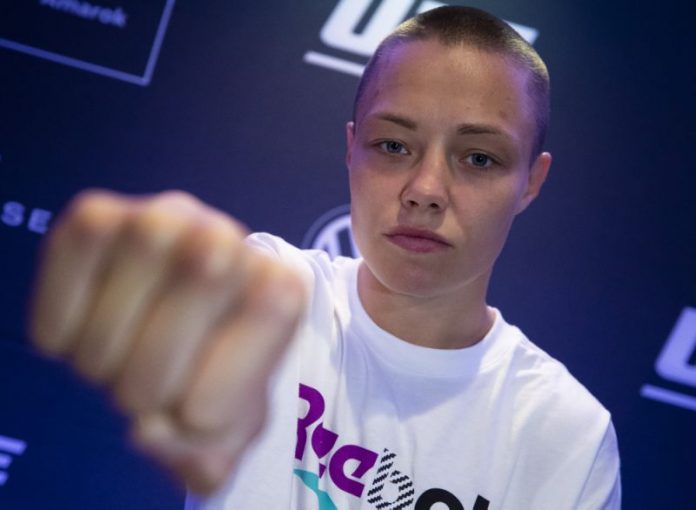 14 months after brutal KO loss, Rose Namajunas has rekindled her love for fighting

Rose Namajunas is as tough as they come. The former UFC women’s strawweight champion isn’t known as “Thug Rose” for no reason.

But Namajunas is one of the most thoughtful and introspective people, let alone fighters, you’d ever want to meet. When Conor McGregor attacked a bus prior to UFC 223 in 2018, Namajunas had to carefully consider whether she wanted to go forward with her title defense that week against Joanna Jedrzejczyk.

On Saturday on Fight Island in Abu Dhabi in the main card of UFC 251, Namajunas returns to the sport for the first time in 14 months when she faces Jessica Andrade in a battle of former champions.

Namajunas fought brilliantly that night and dominated almost until the second it ended, when Andrade lifted her as she attempted to grab an arm bar and violently slammed her to the mat.

Namajunas landed on her head and shoulders and was out instantly in arguably the most violent finish in the UFC to that point since Dan Henderson knocked out Michael Bisping at UFC 100.

There was legitimate concern for Namajunas’ health as Andrade celebrated and the Brazilian crowd roared.

Now, 14 months to the day later, Namajunas will make that walk again. In her media day appearance, as she wiped the sleep from her eyes, she was as placid and relaxed as she’s ever appeared.

“I’ve been really calm and cool this whole time,” Namajunas said to a query about her emotions heading into her return. “Just really confident in my preparations. I’m not worried as much as I usually am.”

That hardly comes as a surprise to Laura Sanko, the UFC/ESPN broadcaster who was a fighter herself. Fighters often talk about their nerves before a fight, but Sanko said they understand that a vicious ending is probably going to happen to all of them.

“There is a certain psychological aspect to being knocked out, I’ll admit, but Rose has been around a long time and she understands it’s part of the game.”

Getting stopped is part of the game. Many of the greatest of all time — Anderson Silva, Fedor Emelianenko, Daniel Cormier among others — have been KO’d. But rarely is a KO as violent and fear-inducing as the one that happened to Namajunas.

The strange part of it is that she dominated virtually every second of the fight until it ended. Namajunas won the first round on all three cards and was on top of her game, looking like she’d grown into her role as champion.

“It’s strange to say this considering the way the fight ended, but that was her best performance until it wasn’t,” Sanko said. “It was like, ‘Great. Great. Great. Oh, no.’ She should have let go of [Andrade’s] arm, but it’s hard to say that too because she almost had gotten the submission a couple of minutes before. She was fantastic in that fight for just about everything except the final couple of seconds.”

Unfortunately for Namajunas, those final couple of seconds are all that matter in the record book. But from a psychological standpoint, it may help her look past the finish at what was otherwise an extraordinary night for her.

Andrade said she knows she needs to change her style because what happened in the first fight wasn’t working. But Namajunas said she has to raise her game, as well.

“What did I take away? For me, I just have to get better,” she said. “That’s basically all I focused on.”

Namajunas is an elite fighter not only because of her physical gifts, but because she demands so much of herself. She has tools that few women possess and so that leads her to critical self-analysis frequently.