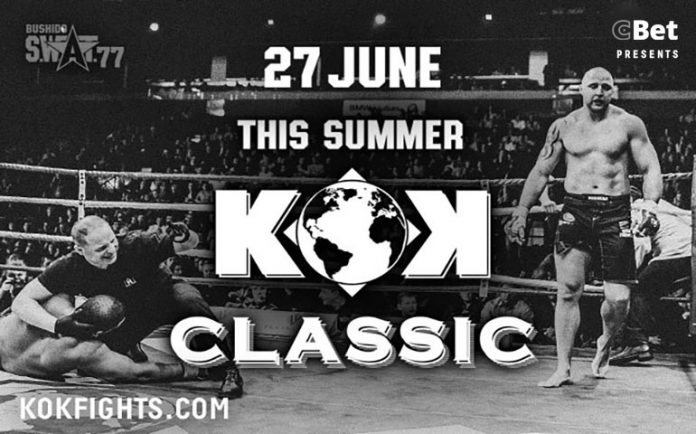 After a series of postponements caused by the coronavirus pandemic, the King of Kings organisation makes its long-awaited return on June 27 in Lithuania.

The promotion has assembled a massive fight card for the occasion featuring fights to be held under KOK KIckboxing, Muay Thai, boxing and ZST MMA rules.

The second part of the KOK Classic will be televised internationally on FightBox HD, and streamed live and worldwide on KOK Fights TV. In compliance with health regulations, no live audience will be permitted.

KOK World Lightweight Champion Henrikas Viksraitis is back in action. The Lithuanian warrior won the title last March from Moldova’s Vitalie Matei, and successfully defended the belt against countryman Mindaugas Narauskas in September.

Viksraitis meets returning veteran Denis Makowski of Poland in a three-round super fight.. The tough Makowski looks to bounce back from a points loss to top welterweight contender Chico Kwasi in his last KOK appearance.

In addition to the Viksraitis-Makowski super fight, rising sensation Dovydas Rimkus is in action. The flamboyant Rimkus is known for his entertaining ring entrances and interviews but has also shown improving skills. Rimkus faces newcomer Daniel Szott.

Here is the fight card (subject to change). The live broadcast begins at 8 pm local time, which is 6 p.m. in London, 1 pm in New York and 10 a.m. in Los Angeles.