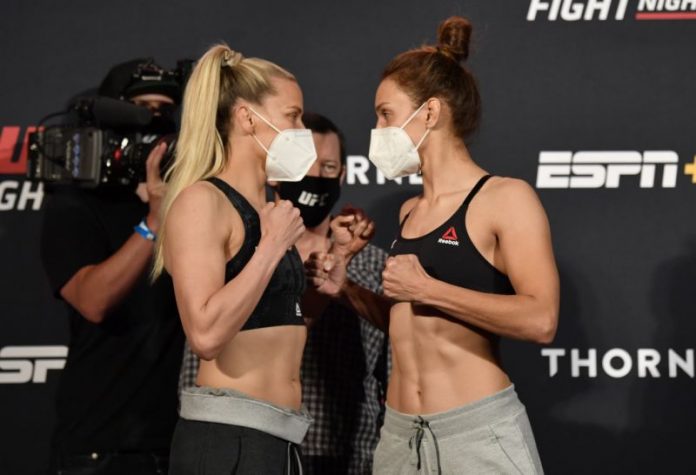 Chookagian faces a Shevchenko again, but stakes and bout are very different

LAS VEGAS — Antonina Shevchenko’s voice suddenly rises and she emphatically says, “No, not true. Not true at all.”

She’s clearly agitated, but it’s not in her nature to show it.

The flyweight meets No. 2-ranked Katlyn Chookagian on Saturday (6 p.m. ET, ESPN/ESPN+) at UFC Apex in a fight that, under most circumstances, would do wonders for her career.

Shevchenko is ranked 12th at 125 pounds, and Chookagian is by far the highest-ranked opponent she’s ever faced. A win would zoom her up the rankings and position her to fight for the title after perhaps another win or so.

For most fighters, that would be true. But for Shevchenko, it’s a bit more complicated.

Shevchenko’s younger sister, Valentina, happens to not only be the UFC’s women’s flyweight champion, but one of the elite fighters in the world. The sisters are incredibly close and spend much of their time together.

The one thing, though, is that the sisters will never fight each other. But when it was suggested that even with the biggest win of her career she doesn’t have a clear path to the title, she bristled.

“We don’t have to fight each other for both of us to be champion,” Antonina said. “She could go to 135 and then we would both have the chance. This is still possible for me.”

Chookagian is a formidable obstacle, though. Until Valentina took her apart and stopped her with punches and elbows 1:03 into the third round of their title fight, Chookagian had won five of six and had looked very good in each of those bouts.

How pandemic has affected Chookagian

Chookagian hasn’t had much difficulty training during the coronavirus pandemic, as teammates Sijara Eubanks and Claudia Gadelha each had fights when the UFC was in Jacksonville, Florida, earlier in the month.

She lives on Long Island in one of the coronavirus hot spots, but said she didn’t encounter many issues. She said she received death threats when she posted training photos, but beyond the lunatic fringe behaving like lunatics, things were not all that different for her.

“What has gone on around here is really crazy and hard to believe,” she said. “But for me, I’m in my own bubble. I do my workouts and I’m around people who are generally healthy. When I’d go to Manhattan, besides the fact that the stores and businesses were closed, it didn’t seem any different to me other than maybe just a lot less traffic.

She realized that she’s fortunate, though, when talking to her family in Pennsylvania. Her brother and her parents operate a bar and restaurant and they’ve felt first-hand the effects of the lockdown caused by the virus.

It’s made her thankful that she’s been able to do her job during this crisis largely unimpeded. She has witnessed the tribulations her family has gone through.

“My family’s bar/restaurant has been severely affected by this,” she said. “Seeing what they’re going through puts things in perspective. I’m grateful that I have the opportunity to work and get paid. There are a lot of people out there who don’t have that opportunity and I think most of us know someone directly who has felt that.”

Chookagian and Antonina each said they want to put on a show to bring enjoyment to fans who have had problems in their daily lives and may tune in. They also said that Chookagian’s fight with Valentina will have little impact on Saturday’s bout.