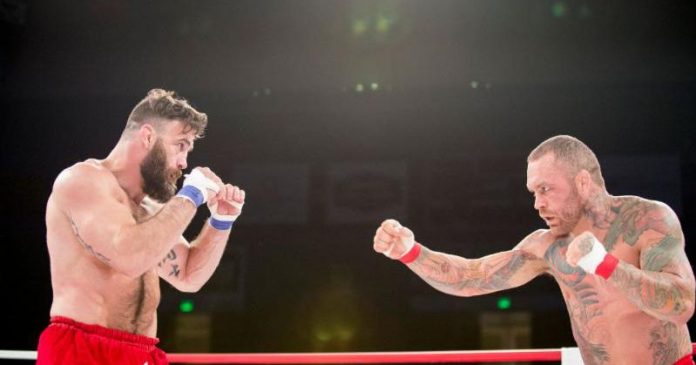 Tomasz Stankiewicz, the promoter of a notorious one-off bare-knuckle fight promotion, was released from federal prison on Wednesday in Philipsburgh, Pa., 18 months after he left fighters, vendors, and industry vets holding the bag.

Stankiewicz, 41, served a one-year sentence for a mortgage fraud scheme the government said caused $2.4 million in losses to banks in Florida, Texas, Illinois and Missouri. He has been ordered to pay back that amount less a $50,000 deposit he put up with a plea agreement that included serving as a cooperating witness in another mortgage fraud case.

The World Bare Knuckle Fighting Federation, which Stankiewicz started up with $100,000 two months after striking a deal with the government, was one of the assets investigated after he went to prison in May 2019. And now that the promoter is free, the fighters who competed for his first event join a list of parties looking to collect.

Of the 22 fighters on the 11-bout card, the majority did not receive their full purse – or any purse – for their work on Nov. 9, 2018, when the WBKFF splashed onto the scene by signing several UFC vets. One fighter, Joey Angelo, is considering filing a class-action lawsuit, per his attorney Alessandro Gelke. Headliner and UFC vet Chris Leben already has filed a civil suit against Stankiewicz, asking for $90,000 in damages.

Those legal issues add to felony charges Stankiewicz faces in Natrona County, Wyo., for allegedly writing bad checks to the fighters –including $15,000 to Angelo and $40,000 to former UFC welterweight champion Johny Hendricks – and defrauding the event’s host hotels. A rep for the Ramkota Hotel in Casper said the promoter still owes $4,000 in unpaid bills. If convicted, he faces up to 10 years in prison on each count.

Attempts to reach Stankiewicz via his attorney of record and partner were not immediately successful.

In June 2019, a prosecutor with the Casper District Attorney’s office told MMA Fighting an active arrest warrant remains for the promoter, who will “likely” be transported back to the county to face charges; a follow-up request for comment was not immediately returned on Wednesday. According to a sentencing report, Stankiewicz could be deported to his native Poland as the result of his status as a convicted felon.

Rebekah Ladd, a spokesperson for the Casper Police Department, said the current warrant on Stankiewicz does not allow the police to extradite him back to Wyoming.

UFC Hall of Famer Bas Rutten, once billed as the promotion’s president, has repeatedly defended Stankiewicz amid a flurry of negative publicity after fighters complained about missed payments. He has said Stankiewicz intends to pay back the fighters at least half of their contracted purses as soon as Stankiewicz restarts a trucking business that appeared to fund much of the WBKFF’s operations. That business, Quo Vadis Logistics Inc., was also investigated as one of Stankiewicz’s assets as the government sought to collect.

“He said he’s going to try and pay half back, so that’s where we are now,” Rutten told MMA Fighting on Wednesday. “I’ve got to talk to him first, but originally, he said he was going to do it, and I told him I’m going to hold him to it.”

Rutten said Stankiewicz had grand plans for WBKFF, providing them generous fight purses and health insurance. Compensation was an early flashpoint for the promotion; reps for several high-profile fighters pulled them off the card when they said original contracts weren’t honored. Rutten blamed the situation on the promotion’s previous matchmaker, Paul Tyler, and said he had to renegotiate “insane” contracts.

Tyler denied wrongdoing and countered that Stankiewicz was to blame for the promotion’s financial woes.