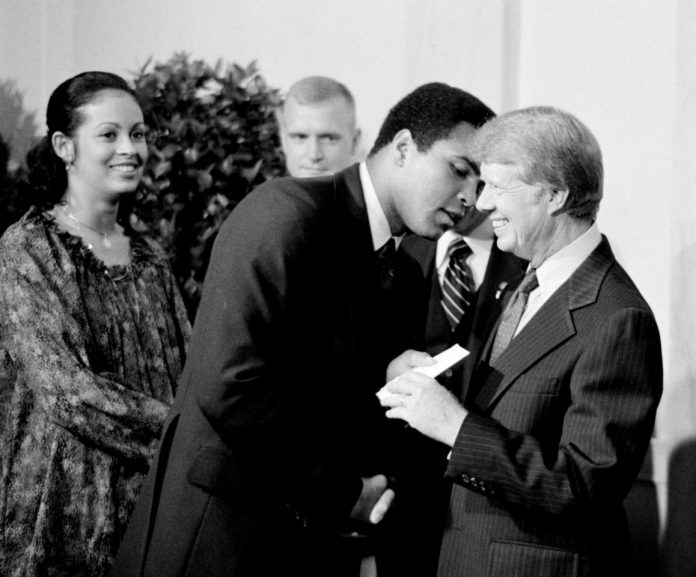 Forty years ago, the United States boycotted an Olympic Games for the first and, to date, only time. This is the story behind Muhammad Ali’s misguided attempt to drum up support around the world for President Jimmy Carter’s decision.

For a time, Muhammad Ali could take down any opponent inside a boxing ring. But in the world of international diplomacy, Ali was an utter lightweight. Nowhere was that more obvious than when he attempted to drum up support for President Jimmy Carter’s Olympic boycott in 1980.

No figure epitomized the intersection of sports and politics during the Vietnam War more than Ali. Defiant and outspoken, he was willing to sacrifice more than three years of his career for his beliefs. That principled stand made him a hero to many Americans … and it led many, Ali included, to overestimate the reach and strength of his political influence.

“Ali couldn’t say no to anybody,” said Jonathan Eig, author of the 2017 bio “Ali: A Life.” “It was like what Homer Simpson said about beer — Ali’s generosity was the solution to, and cause of, the great problems in his life.”

By 1980, Ali was a largely ceremonial figure. The legacy-making Rumble in the Jungle and the Thrilla in Manila were years behind him. He’d been reduced to gimmickry like an exhibition against Japanese wrestler Antonio Inoki. He’d lost his title to Leon Spinks, and then regained it in a pair of ugly fights. His speech had begun to slow and his hands to tremble.

Ali had basically rallied back from the hatred he’d endured from much of America for refusing to be drafted in the 1960s. He’d largely stepped away from politics, focusing on being Muhammad Ali rather than being a radical political force. He’d even visited the White House during the Ford administration after beating George Foreman in Zaire.

“Ali was drawn to power and powerful people,” said Thomas Hauser, author of the 1989 authorized biography ‘Ali: His Life and Times.’ “There’s irony in the fact that this man who loved freedom fought two of his most significant fights in Zaire and the Philippines.”

Carter called for the boycott following the Soviet invasion of Afghanistan in 1979. Despite the strong national desire for a vigorous defense against Soviet incursion, the thought of an Olympic boycott was divisive at home, and even more fraught around the world. Carter recognized that he needed buy-in from the American public and the world at large. Carter’s people reached out to Ali, and he jumped in with both gloves, dubbing himself “the black Henry Kissinger.”

(The Olympic tour wasn’t the first time Ali’s name had been mentioned in connection with international politics; there had been some discussion about getting Ali to help resolve the ongoing hostage crisis in Iran. As a famous Muslim, the thinking went, perhaps Ali could have helped end the crisis. But the Carter administration eventually decided that no American could negotiate with Ayatollah Khomeini.)

The Carter administration’s plan involved sending Ali on a goodwill tour designed to whip up support for the boycott. Ali was to fly to Tanzania and then on to Kenya, Nigeria, Liberia and Senegal. The idea was that he would preach Carter’s gospel, trying to indicate that America is the land of the free, and for these nations, participating in the Olympics was the equivalent of supporting the Soviet regime.

“There was a specific interest on my part in having Muhammad Ali explain our country’s position on the Olympic boycott,” Carter told Hauser in 1989, “and also in his pointing out what our nation is, what its basic policies are, our commitment to freedom and human rights, and the fact that we have black Americans who have been successful with a diversity of religious commitments.”