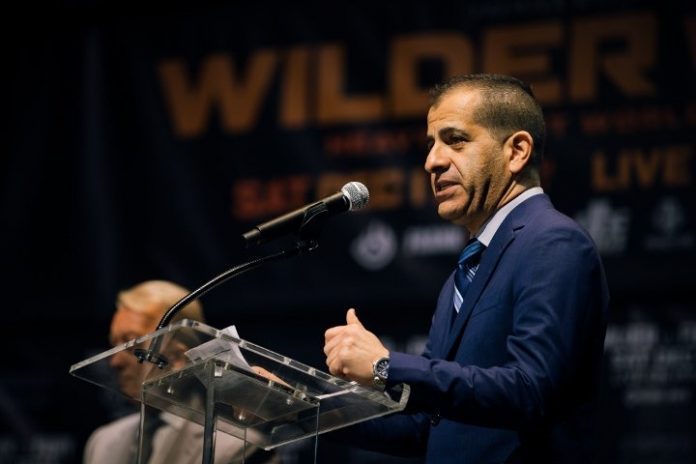 Combat sports fans can unite as one and rejoice.

Both boxing and MMA fights are on track to be staged on the same night, from the same location, some of which will even be crossover bouts, and it will be presented by ViacomCBS properties in a collaboration.

Stephen Espinoza, president of sports and event programming for Showtime, and Scott Coker, president of Bellator MMA, are in serious discussions to bring both disciplines to consumers in a unique fight format.

“Crossover events are certainly one of the ideas Scott and I have kicked around and brainstormed, and pairing them together programming wise on the same night and start blending those audiences together with a hybrid event at some point,” Espinoza told BoxingScene.com in an interview.

In January, ViacomCBS reshuffled its management deck and operational structure after a corporate merger and had Coker report to Espinoza. The duo have a relationship that spans over 20 years.

Shortly after the reassignment, Coker told BoxingScene.com that he and Espinoza had already kick-started conversations to work together.

“Whether it’s fighter vs. fighter, or an event where you do both styles in the same night, the door is open, and those conversations are happening. It hasn’t been determined, but I do think it will happen at some point,” said Coker. “There will be boxing guys going into MMA, and MMA guys going into boxing. That’s something Stephen and I have talked about.”

Showtime previously aired Strikeforce MMA events led by Coker until the promotion was purchased by the UFC in 2011. Coker also has years of experience presenting an alternate mix of kickboxing and MMA events.

“They have experience doing that, and it would be an absolute natural with boxing,” said Espinoza. “I’m excited to see how quickly we can do something like that.

“We had a lot of momentum [with Strikeforce]. It marked the end of an opportunity. We’re excited to have Bellator back. ViacomCBS is absolutely committed to it and wants to grow it. They see the potential. With the merger, it made sense for me to have oversight of it simply because we can unite the two combat sports businesses into the portfolio, as well as my relationship with Scott. He’s an important part. We have a lot of plans. Obviously coronavirus interrupted a lot of them. We’re anxious to get back in business.”

Bob Bakish, president and CEO of ViacomCBS, said in the corporation’s latest earnings call on May 7 that combat sports’ return in a post-coronavirus world is right around the corner. The company has set up a sound stage in Studio City, California to bring both boxing and Bellator back to fans in separate events, perhaps as early as July.

Espinoza said the plan is to eventually have Bellator broadcast on his premium cable network after the promotion’s distribution deals expire with DAZN and Paramount Network.

“We’re going to honor that deal,” said Espinoza. “There is no plan otherwise. In the long run, we’re going to try and grow the business in a way that is organic and rewarding to the fans … That’s the goal, generally, to have Bellator [back on Showtime and ViacomCBS properties] and use the combined power of the entire corporation. In the long term, all of those assets are going to be used to help Bellator grow. The timing of that remains to be seen, as there is a good amount of time still left on the DAZN deal.”