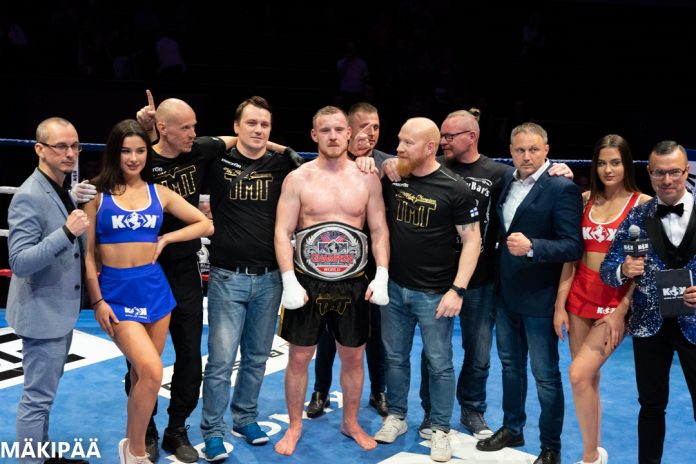 KOK Champ Forsberg Ready to Get Back to Business

KOK World Middleweight Champion Daniel Forsberg is ready to get back to business after injuries and the coronavirus pandemic disrupted the tough Finn’s career.

“The quarantine is getting off and normal training starting. Injuries are ok,” Forsberg said from his hometown of Turku, Finland, where he trains at the Turku Muay Thai (TMT) Gym.

A nagging shoulder injury caused Forsberg to withdraw during fight week from a scheduled title defense at the KOK World Series event in Helsinki last February. “The Finnisher” was scheduled to risk his belt for the second time against Polish contender Dawid Mirkowski.

“I had (an) injured shoulder. I was also sick but this shoulder-there were broken ligaments,” he said.

“Now, it’s ok. If it starts to hurt again, it needs to get surgery.”

Forsberg would like to defend his belt against Mirkowski next. The Pole picked up a win over countryman Jussi Pirttikangas after the champ pulled out of their match.

In January, Forsberg ventured from Finland all the way to Las Vegas, USA and challenged for a world Muay Thai belt.

The shoulder affected his performance in that match, according to the Finn, who described the trip as “exhausting.”

KOK is returning to Finland in March 2021 per KOK Finland promoter Timo Tamminen. Forsberg is ready for a home title defense after the promotion recently banned non-title bouts for its world champions.

“I need to defend everytime I fight in KOK cause I hold the belt,” he explained.

“I like KOK organisation. Things are simple. I’m always grateful I have the opportunity to fight there.”