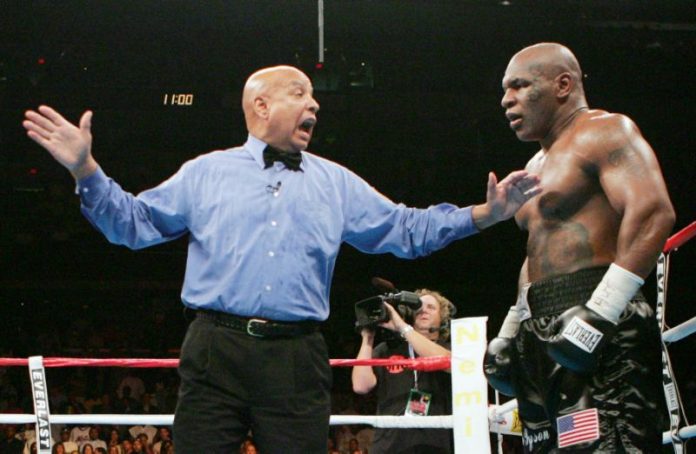 Why a Mike Tyson comeback is a horrible idea

Lost amid the furor of Mike Tyson’s training videos he’s released has been one simple fact: How bad of an idea it is for any 50-plus-year-old man to compete as a boxer, particularly ones that have been retired for years.

Tyson’s videos, in which he’s shown hitting the mitts with coach Rafael Cordeiro, are almost certainly part of a product endorsement strategy, though the possibility exists that the former undisputed heavyweight champion could come back to compete in an exhibition for charity.

But fans are excited by Tyson’s videos and anticipating a comeback. Other notable 50-somethings, including long-time Tyson rival Evander Holyfield and James Toney have also taken to social media to drop hints about a comeback.

Lennox Lewis tweeted that he’s been training, as well, though he put a wink emoji at the end of his tweet.

It’s simply not a good idea, however, for men of that age to be talking of boxing. As Toney often said during his illustrious career, you don’t play boxing.

There were multiple in-ring deaths in 2019 that should serve as a warning that this is no sport for those past their primes.

Playful slow-paced exhibitions that raise money for charity are one thing; but legitimate comebacks and professional fights are another thing entirely.

They weren’t remotely the same against far lesser opposition than when they fought during their primes, and now all of a sudden we think it’s a great idea for them to come back?

If they ever fought each other, it would draw enormous media coverage even though most outlets totally ignore boxing these days. But for a sideshow like Tyson-Holyfield 3, they couldn’t resist. Papers which haven’t had a peep about boxing in their sports sections for years would be all over it.

The result of all of it is predictable. A lot of people would pay a lot of money to watch. Then, the fight would unfold and it would look like it’s in slow motion. It would be horrible, one or both of them could get hurt and fans would be outraged that they were taken yet again.

Worse, the message that is being sent is the problem. This isn’t golf where you can have a seniors tour that thrives. The risk that boxers face is grave even when they’re in their primes, but when they’re slower and less able to defend themselves properly and have taken a career’s worth of punches already, it’s beyond the pale.

The risk is too high and it shouldn’t be considered.

At least on Tyson’s part, this appears to be a well-devised marketing plan.

But if you know Holyfield or Toney, you know how much they love the battle and would eagerly get back into it if they could.

That’s the kind of thing that needs to be prevented at all costs.

Stop this nonsense now before it’s too late.