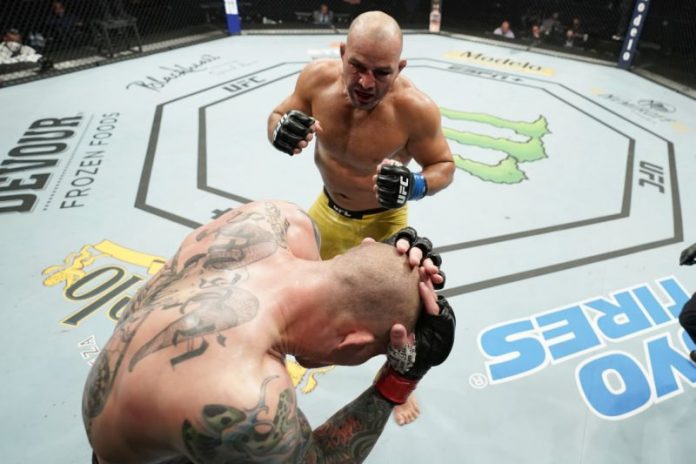 Glover Teixeira was brilliant. Anthony Smith was courageous. And his corner was foolhardy.

Smith’s corner, headed by Marc Montoya and James Krause, inexplicably allowed their man to take a brutal pummeling from the 40-year-old Teixeira, who after a slow start in the first round looked like he was 25 and on top of his game.

After Smith won the first round with a series of straight right hands, Teixeira took over in the second. But the fight turned roughly 90 seconds into the third round when a right uppercut hurt Smith and a clubbing left hand dropped him.

From that point on until the merciful end a minute into the fifth round, Smith was pummeled and had little chance to win. It was remarkable that he survived the third round after being hurt, when Teixeira swarmed him. Referee Jason Herzog gave Smith a remarkably wide latitude at the end of the third round as Teixeira was going for the finish.

All that did was mean that Smith would take more huge shots for another six minutes. At some point, the corner needed to step in and it did not. When Smith complained about his teeth while on his stool, it was a sign for the corner to call it off. Even though he showed his heart and refused to quit, he had nothing on the punches he threw after the third-round uppercut, and he was hurt by virtually everything that Teixeira threw.

It’s a tough choice a corner has to make when their fighter is hurt. They have to balance the significance of a dramatic comeback win to a fighter’s career against his safety. Smith’s corner is experienced and could see he not only had little on his punches, but he was being hurt by everything Teixeira threw at him. That’s when it should be stopped.

That took the spotlight off of a remarkable performance by Teixeira, who has now won four in a row and figures to move into the division’s top five ranked fighters.

Teixeira was in some trouble in the first as Smith was using the 1-2 to control the distance and the pace of the fight. But he turned it around with slick boxing in the second and took over the fight in the third.

After giving serious consideration to retirement, he’s now rejuvenated and at least tangentially in the title mix.

Teixeira’s always been heavy handed, but he went to the UFC Performance Institute and took the nutritional lessons they provided to heart. In his last four fights, he looked as good as he has at any time since he lost to Jon Jones at UFC 172 in 2014.

Before he could get untracked, though, he had to figure out a way to slow Smith’s roll, because he was hurting him and keeping a quick pace.

“I was hoping [he’d slow down],” Teixeira said, laughing. “The guy hits like a truck, man.”

So, too, though does Teixeira and the fight turned in the third when he landed one of his patented and powerful right uppercuts.

It landed on Smith’s right eye and he staggered back and pawed at his eye as if he’d been poked. Teixeira followed him and landed a left that dropped him.

From that point on, it was as obvious as obvious can be that Teixeira was going to win the fight. The question really was how much damage his corner would allow Smith to take.

He took the kind of beating that takes time off of one’s career. Every fighter can only take so many punches and Smith took a lot of clean, hard, undefended shots to the head. The bruises heal, but the impact of those blows lives on long after the bout.

“I honestly thought they wouldn’t let him come out for the fifth,” UFC president Dana White told Yahoo Sports via text message.

If they’d stopped it after the third, it might have been derided as too soon, particularly after Smith so valiantly fought to survive the last three-plus minutes of that round. There was no reason to send him back out for the fifth and he simply ate more head shots as a result of it.

Smith, who was hoping to parlay a win into another shot at Jones’ championship, is now in for a long layoff and faces a difficult climb back to the top.

His corner didn’t make things easier on him by failing to save him from himself.